In high school my best pal and I would go fishing in Canada with our dads. We decided to do the trip again this year. Destination: Sandy Beach Lodge on Trout Lake in northern Ontario, 26 miles northeast by seaplane from the town of Red Lake, a five hour drive from Winnipeg. With no roads in and only four small fishing camps on it Trout Lake is pristine wilderness. After being depleted of its stock to feed Canadian troops during WWII the lake is once again teeming with Walleye, Northern Pike, and Lake Trout. 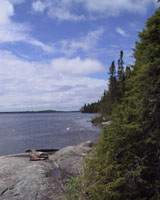 The lake is home to Ojibwa Native Americans, many of whom provide guiding services to fly-in fishermen like us. Tough fellas, the Ojibwa. The best guide, Bruce, was a quiet badass with a tattooed list of crossed-out former lovers on his right arm. He explained to us very matter-of-factly how he hunts moose around the lake. Not with a gun, not with a bow, not even with a trap. No, Bruce hunts and kills moose with … an axe. Just sneaks up on them — moose sleep standing up like cows — and thwack-thwacks them in the neck until they die. Trust me, if you saw this guy you would not doubt this story one bit. To facilitate getting the moose back to camp Bruce would normally hatchet it to death as it slept standing in shallow water. Thing is, Bruce can’t swim so if there were any, you know, issues while hacking the half-ton beast to death Bruce could have a problem on his hands rather quickly. Bruce scared me a little bit. 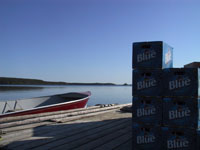 A fishing trip with the guys on a remote lake is rather like life on a sailing ship in earlier centuries, I’d wager. Specifically I think the incidence of scurvy might be comparable. When every provision at the camp has to be flown in you just have to have priorities. Case of Labatts or apple bushel? Canadian Club or fresh berries? Luckily even in such conditions human ingenuity thrives. Turns out that the Inuit people who live well north of Trout Lake near the veggieless Arctic Circle have a fascinating method to avoid succumbing to Vitamin C deficiency. OK, follow this. Algae + moss = lichen. Lichen grows on rocks near the Arctic Circle. Lichen contains Vitamin C. Humans cannot digest lichen. But caribou can … and do. That’s right. The image you have is correct. Inuit get their veggies by disemboweling caribou and squeezing out half-digested lichen sausages from the entrails. Yum yummy!

But that’s not all! Caribou are smart enough to swim across lakes to islands to give birth to their calves because they know that wolves — their natural predators — can’t swim. And because caribou hair is hollow even a newborn calf can float in the water and quickly learn to swim back to the mainland. And this is why Bruce the Axe-Hunter does not stalk caribou. 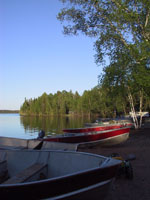 Here’s a typical day. Correction, here is what every day was like exactly. Wake. Eat breakfast of carbohydrates and pork. Fish until noon. (Start drinking at first catch.) Find shred of shore to build a fire and cook fish for lunch in cube of pure, snow white lard. Keep fishing until 5pm. Happy hour until dinner. Dinner of carbohydrates and [other meat]. Sit around fire, drinking. Actually the best part of the evening was by far the appearance of the Northern Lights. It was hard to take your eyes off them as they pulsed their way into the whole night sky. Like zoning out in front of a screensaver. 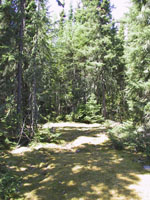 The forests around Trout Lake are straight out of Middle Earth. Sphagnum moss covers the ground giving it a strangely suburban lawn feel, until you step foot into it and realize the spongy sensation is what you thought the astronauts must have felt like bounding along the moon in that much-replayed Apollo footage. It is hard to believe such density of living things could exist on what is essentially exposed rock — what is known to geologists as the Canadian or Pre-Cambrian Shield. Glaciers basically shaved off all the topsoil and deposited it into the heartland of the US (thanks for that!) leaving a gigantic expanse of rock. But travelling around Trout Lake you are reminded again and again how life will take hold in the least hospitable places. From a distance you see an island grown over with trees, a fractal crayon box of greens. But as you get closer you realize that the spongecake biomass that it all grows out of is just the accumulated recycling of eons of plant life that took hold, died out, and decayed — creating a little more for the next round of life to grab hold of.

I really feared connectivity withdrawal up there. With no cell service, no phone line, no TV, and of course no Internet I wondered how I would cope. You know what? I didn’t even think about it. I’m not nearly as dependant on being wired in as I thought I was. This realization may have been the best part about the trip. Hmmm, no. Catching the biggest Northern of the trip at shore lunch in front of everyone else. That was the best part.

I wanna go back.

One response to “Done fishing”