The most interesting city in Italy, in my opinion, is not even on 5% of tourist itineraries. Matera is a gem protected by being nowhere near the sea or a navigable waterway in a region, Basilicata, which is still struggling to shed the image of bumpkin backwardness held by its northern Italian compatriots. Matera was centuries-old before Rome was founded and is known primarily for i sassi, troglodytic caves carved from the soft rock of the hillside. It is impossible to tell where the hill leaves off and man-made structures begin. Carlo Levi famously exposed the plight of the impoverished populace of Matera and Basilicata in Christ Stopped at Eboli and since then things have improved. The Italian government moved residents out of the caves a few decades ago and set about to rehabilitate and modernize them. Though most of the caves are abandoned, some Materans are now moving back in, some own them as storage, and at least one hotel exists built into the rock. 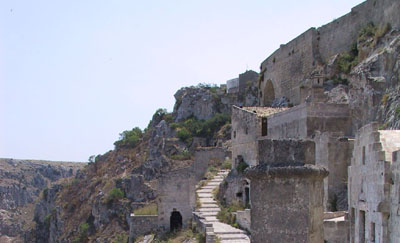 Now comes word that Matera has a new use for the rock-hewn dwellings: data-haven. A company called Datacontact is using the caves to house their servers and a call center. It makes some sense. Physically the servers could not be better protected inside the mountain. Though in a tectonically active area, the sassi have survived in their current form for over a millennia. Geographically too the placement is sensible. Labor is plentiful in Basilicata marginale, as regional natives mockingly call themselves. One hopes that this geographic marginalization (and associated prejudices that accompany it) will matter less in a the virtual world of telecommunications. After all, in a network there is no such thing as a margin.

And lastly a cookbook recommendation: A Mediterranean Feast. Got this as a Christmas present and it is a wonderful introduction to the food of the whole region. Southern Italy, being a cross-roads of the Mediterranean, is a hodgepodge of cultures and influences not known in the more European northern regions of Italy. Greek, Roman, Norman, Albanian (more on that later!), Spanish, Muslim — all mixed together. So this cookbook, as a much a regional history as a culinary guide, is particularly illuminating about the myriad influences that define Basilicatan cuisine. This weekend I made Lucanian roast chicken with homemade wheat pasta. But really that was just an excuse to try Mark’s reconstituted apricot tart recipe. Apricots, of course, being a favorite fruit in Egypt and so wonderfully in keeping with my OCD-like focus on the Mediterranean basin. Tip #1: add some orange juice and even a splash of sweet liqueur to the water that will rejuvenate the dried apricots overnight. Tip #2: Don’t try to force wheat pasta through a capellini-sized extruder die. The wheat is too dense and the angel hair holes too small. Your machine will blow up. Trust me.

You may notice that this entry belongs to a new blog category, sub-category really, called Basilicata. I’ll be posting more on this region throughout the year. Though there’s been one travelogue written on the region recently, the instep of the boot is fascinating and unknown to most. Just like Ascent Stage.

One response to “Matera”