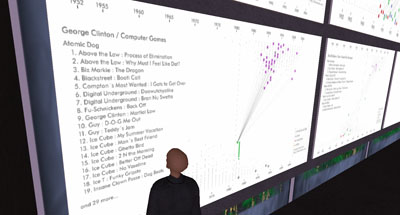 A few weeks ago I moderated a panel of artists and technologists at the Aldrich Contemporary Art Museum whose aim was basically to complicate the distinction between the two categories of panelists. It was a great disussion in a superb environment: the Aldrich is a first-rate, forward-thinking museum in Ridgefield, CT, a place you’d never expect it. The germ of the discussion was creativity. How are technical creativity and artistic creativity — “innovation” to be buzzword-compliant — related? Are they analogous? If so, where do the similarities break down?

We stacked the deck a bit by involving technical folks whose work was clearly artful and artists whose medium was heavily technologized, but the audience itself, also involved in the discussion, were from a wide range of both backgrounds. The goal of the day was to try to isolate, such as possible, the moment of inspiration — the moment when you knew you had something worthwhile. How did this come about? Almost everyone said the idea came first and only then was the tool sought to make it real. One of IBM researchers said that if he could perform his complex visualizations with a pencil he would.

This surprised me. One of the great things about technology, it seems to me, is its extensibility in ways not intended by the designer. I figured both groups would see this as inspiration in itself. The artist, perhaps not understanding fully the capabilities of a digital tool, cajoles (even breaks) it in unique ways — while the geek, knowing intimately the capabilities of a particular tool, hacks or applies it in unique ways. Admittedly tool-inspired creativity is only one route, but no one on the panel seemed to put much stock in it. Maybe I’m wrong, but can I be the only person who has loaded an application and thought “Gee, I’d love to make it do X.” The creativity, in part, comes in making the tool behave “improperly.”

The panelists were a great bunch. See for yourself.

See also Geeks in the Gallery, unrelated to the Aldrich event but very relevant to the discussion.