My parents recently built a second home in Galena, IL. Galena is in the far northwest corner of the state, nestled between Iowa and Wisconsin. It was a major river town in the 19th century, home to Ulysses Grant and a slew of other Union generals. But the river silted up, Chicago grew up, and Galena slumbered away. Now it is basically a quaint time capsule catering to Chicago weekend escapees, the kitschy knick-knack obsessed, and Civil War buffs.

Galena is the word for lead sulfide, veins of which criss-cross the area. As luck would have it, my parents’ land has an abandoned lead mine on it. This isn’t suburbia; the lots have (fantastically) reverted to native Illinois prairie. But it was once farmland and apparently the owners way back found a small lode and went for it. The builders of my parents’ home wanted to fill the mine entrance in with excavated soil and landscape it. My father, to his infinite credit, said screw that I want a lead mine on my property. And this brings us to today when I had to enter and see what there was to see.

I’ll preface this by saying that my adventure was not formally approved by the family. My boys of course were right there with me but mama’s look of disapproval, had it been cast groundward, could have dug its own mine.
I struggle to list a hazard that this mine doesn’t contain so in the interest of having something to blog about I’ll here detail those that it does. The mine is completely structurally unsound, having been abandoned more than a century ago. The whole reason for digging it in the first place is because it contains lead, the very substance that causes parents to obsess about our kids eating paint. It is wildly overgrown and so home to all manner of critters, vermin, and poison flora. There are tons of snakes in these parts and my dad mentioned that he saw something “dog-sized” leaving the shaft yesterday morning. Hmmm, lovely.

So I went in. The kids, standing at the rim of the depression that led to the shaft, were nearly apoplectic with excitement. And while we’re using apoplexy as a metaphor I’ll mention that it also described my wife at this moment, but for very different reasons. 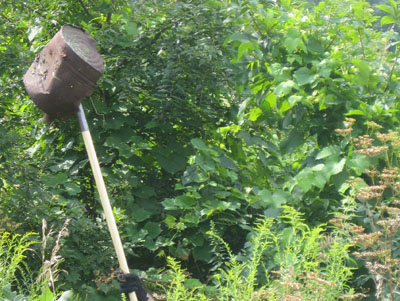 The shaft entrance had long ago been filled in. Metal containers of all varieties, a tire, and barbed wire clogged the hole. I struggled to loose them but the entrance was a garbage pit. Every time I unearthed a rusty shard I expected some venomous slitherer to inform me of its displeasure. A wooden beam — really a crudely shaped log — lay uphill from me in the overgrowth and seemed to mark the entrance to the shaft. My father, lost to me but for yelling, agreed that the best plan was to wait for fall when the foliage died off and then resume digging. Actually he wants to rent a ground radar to see what we’re up against. He thinks he’s identified a second entrance (exit?) nearby.

In the end this is just good fun. How many kids grow up with an abandoned lead mine as a playlot? Too few, I say.