Pardon the Al Bundy moment here, but I gotta say that reliving childhood via your own kids can be damn fun. Possibly my strongest memory of pre-8 year old life is watching the Superfriends cartoon (followed by Scooby Doo) with my dad in the basement on Saturday mornings. I loved the Superfriends intensely, so it was with some trepidation that I bought the recently released first season of The Challenge of the Superfriends for my five-year-old son. Trepidation because, of course, nothing ages well from the 1970’s. Or very little besides Pink Floyd. I didn’t want to load the DVD initially, afraid that’d I’d fracture a time-honed nostalgia that remembered the Superfriends as gallant, smart, and timeless. 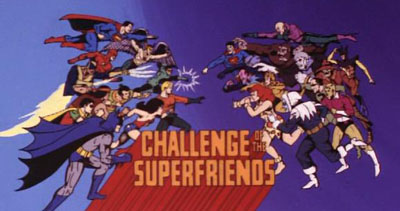 Certainly the Superfriends is simplistic. The Legion of Doom’s goal is simply to spread evil and conquer the universe. Dialogue is overt and crude. And the whole thing is borderline racist with token ethnic superheroes that are clearly secondary to the main stock. And yet, I wasn’t disappointed. The storylines are suprisingly unique and clever. Yes, each episode starts with a new plot by Lex and friends (none Super) to overthrow the Hall of Justice with the Superfriends having always to react (how about some proactive justice, people?), but there was a lot of thought put into each episode’s twist. Time travel, summoning of the undead, alternate universes — the type of thing that was way beyond me as a kind but now strikes me as fairly interesting for a saturday morning ‘toon. And if the the recent upsurge in nightmares of my son is an indicator also fairly “adult” in content.

The real evidence of the value of The Challenge of the Superfriends comes from comparing the seasons that preceded it. Challenge was the first where they got rid of the awful, basically useless teen sidekicks and pets. You recall Wendy, Marvin (I’m sorry, Marvin the Superhero?), and their dog Wonderdog and of course the Wonder Twins and their annoying monkey Gleek, yes? Well, sorry about that. What a dark period that was.
Viva Green Lantern.