It isn’t exactly news that IBM is interested in virtual worlds, but Friday represented a bit of a milestone when we unveiled our official land in Second Life — twelve interlinked islands, open and built-out for business use, research, internal collaboration, and anything else we can think of. As always, Eightbar has the inside scoop. 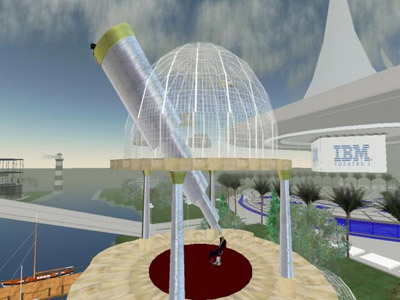 It’s exciting times, but not because we’re in Second Life. We’ve been working in SL for months, albeit without the sanctioned presence that this island megaplex gives us. This is important because it represents the results of collaboration between a somewhat bewildering variety of interests inside IBM and it points to much more to come. This event, the founding and development of the twelve islands and not Sam Palmisano’s announcement in Beijing (much as I loved it), is the real beginning of IBM establishing itself in this space (literally).

But what really interests me — end press release, start me release — is that this will be a springboard to the rest of the metaverse. Second Life itself is but an island, really, a popular walled garden that was one of the first to the game. Zoom out and move forward a few years and SL will be just a powers-of-ten-sized chunk of a much larger universe of virtual worlds. The Forbidden City: Beyond Space and Time will be one, as will thousands of others. In fact, to really make an impact there shouldn’t be distinctions between the various worlds. One should be able to hop about as from webpage to webpage, seamlessly. That’s a bit of a dream these days with the leaders in the industry less interested in standards and interop than community-building. But we’ve seen that before with the browser hell of the early web days and we’ll no doubt see it again.

If you’re in Second Life and would like to visit, just search for IBM on the map and pick an island. There’s a lot to see. I’m Immerito Foley in-world. Ping me if you need a guide.