I’ve been back in St. Petersburg, Russia this week, my first visit in seven years. Much has changed, nearly all for the better.

The flight over on Lufthansa was pleasant as the snowstorm in Chicago kept most of the passengers at home. Lufthansa has recently overhauled its seats, providing in-seat power without needing any special adapters. The plug universally accepts nearly all global standard plugs. Why can’t more airlines do without the funky connector, I ask? There’s even an in-seat Ethernet port which briefly got my hopes up, but, no, the Boeing Connexion service remains shut-off. You know, it’s not like they de-orbited all the satellites. Why won’t some enterprising soul purchase them and reinstate in-flight connectivity? Please? 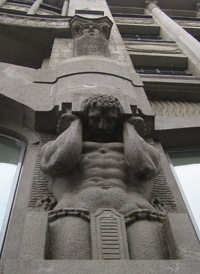 St. Petersburg is bustling. In 2003 the city celebrated its 300th anniversary and clearly it got spruced up for the event. The colorful, stuccoed facades of nearly all city buildings, gorgeous even back in the doldrums of the 90’s, are a vibrant pastel confection that contrasts wonderfully with the permagray of the sky and frozen canals. The uptick in the economy is visible nearly everywhere.

I stayed at a relatively new hotel, the Novotel, just off the arterial Nevsky Prospekt. It was adequate, if quaintly backward in its attempt to be a modern western business hotel. Internet connectivity was purchased by the byte, about a rouble per MB. I had no idea what to purchase, though I quickly learned that one eats up 100MB (the default purchase) without even thinking. I actually complained about it, thinking there’s no way I used 100MB over an evening of e-mail checking and web surfing. And yet, I’ve probably purchased close to 3/4 GB of throughput since I’ve been here. (And they raised prices 50% in the middle of my stay!) The hotel gym was pathetic: two flimsy bikes, one treadmill with a tread that slipped dangerously, an elliptical (broken), and two weight machines that looked like Ivan Drago castoffs from the 1980’s. Old-style Russian hotel amenities are still available, of course: prostitutes prowl the lobby bar late into the night offering “company” should you so desire.

Speaking of love for sale, I arrived on Valentine’s Day. This Hallmark holiday seems to have ridden the globalization wave nicely. My colleague and I could find no place to eat due to holiday “specials” at nearly every restaurant. We were actually waved off from a few restaurants before even getting to the host. But still, there’s an abundance of new places to eat. (And not a Starbucks in sight. My colleague drinks decaf coffee and was repeatedly stymied.) Fewer restaurants exhibit the once-standard pole-dancing entertainment, also a plus. No really, it is not so easy to dine with a topless waif sliding up and down a pole to throbbing Russopop. But, replacing vice-for-vice, nearly every restaurant we went to featured hookah pipes. (There’s no such thing as a non-smoking section in practice.) Shisha is amazingly popular here. Not only can you order dozens of flavored tobaccos, but you get options for the liquid in the chamber: water, cognac, wine, juice and even milk.

The beauty of the city is remarkable, given how ugly winter tries to make it. Slushy black snow covers every sidewalk. Dangerous ice slicks mark regular distances between building downspouts that empty right into the public walkways. And yet, the ice can be gorgeous. The Neva river is frozen solid with a small path broken through for the occasional intrepid watercraft. Each morning the path had formed a thin layer of ice on it, a scabbed laceration down the middle of the blindingly white river. 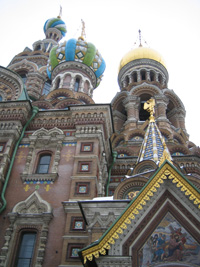 Nightclubs power the evenings here, as they do in Moscow and, according to a Russian pal, in Kiev. (He could simply not say enough about the supermodel-caliber club-life of Kiev these days.) The music seems a touch better than it did back when I first visited. It is still clogged with House-inspired Russian cheese, but I think there’s hope. We returned to an old haunt known to me only as the “Thursday club” because that’s when we’d visit it in years past. I finally asked what the real name of the club was. In passable-English my friend said “it is like a whore’s house.” Ah, I see. And all these years I just liked to drink Baltika beer there and dance. Only later did I learn that he said “like a horse’s house.” The club occupies a former stable, you see. It is right in front of the amazing Church on the Spilled Blood. Bathed in floodlights, the traditional Russian church never fails to strike awe when you stumble from the club in the wee hours.

We had a bit of free time on Saturday so we set out for the Bolshoi Puppet Theater. Everything was in Russian. We had no idea what we were watching. But it was fun to see a full-scale production done with puppets. The skill required was considerable and it was a pleasure to hear the hall full of kids chuckle. (Also a little depressing as both my colleague and I have small children at home. If you want to be instantly homesick, go sit amongst several hundred happy children in a foreign country.) The theater itself was a fire hazard waiting to happen. When the house lights went down it was absolutely pitch black. No aisle lighting, no exit signs. Children wailing. Panic could have ignited quickly. Instead, a puppet show started.

Keeping with the kid theme, we attended the St. Peterburg Circus. This circus is the oldest in Russia. It was in a stunning but dilapidated hall off the Fontanka quay and provided a theater-in-the-round for its one-ring show. I hadn’t been to a circus in many decades and yet the mixture of delight and horror as the entertainers performed death- (or least serious injury-) defying acts came right back to me, like I was eight years old. Everything was just a little bit shabby. The auditorium, the performers’ outfits, the ropes and pulleys that prevented human splattering in the ring — it all seemed a little worse for the wear. One wonders if there is any kind of circus safety review board in Russia. Most depressing of all were the animals. On the one hand it was the most diverse bestiary I’ve ever seen. To the typical circus menagerie were added porcupines, foxes, ostriches, rats, and at least two species of critters I could not identify. (Though no elephants and much to my chagrin no bears. C’mon, aren’t Russian circuses supposed to have bears?) But the big cats, horses, and dogs were all mangy and old and a few of them looked actually injured or arthritic. I’m not saying they were abused — at least not in the ring and at least insofar as being in a ring isn’t taken to be abuse — but clearly they were past their prime, just like the lion-tamer and his assistant, actually.

It is interesting to compare this mini-rebirth with the tempest of development going on in Beijing right now. St. Petersburg seems to be upgrading where Beijing is building an entirely new infrastructure. At least most of Питер was recognizable seven years on. I can hardly get my bearings in Beijing after even a few months away.

Of course, I was in town working with the fantastic Hermitage Museum. It too seems to be on the uptick with long-needed signage enhancements and halls packed with visitors. But more on this topic later.

A small photoset is available.

UPDATE: Yikes, maybe I spoke too soon. Just hours after I wrote this and left town a bomb went off across the street from my hotel, injuring six. Details here.

See also: Return to the Hermitage