Remember the Urban scar tissue post? No, of course you don’t.

Well, it was about the way cities have of slowly assimilating unused infrastructure and how this becomes visible when you scale out, looking at the city macroscopically. The earlier post showed the way the buildings have been shaped by the tracks that are no longer there, a ghost-limb of transportation past.

But the very southern edge of the line is still in use. Twice weekly. It is called the Sugar Train and it delivers sugar to a confectionary. The tracks, embedded nearly flush with the pavement sans sleepers, slice through private backyards and parking lots. My gym prohibits parking on the tracks tuesdays and thursdays because of the delivery. Up until last week I had never seen this mythical train.

Turns out this delivery route is a fantastic pain in the ass for everyone involved. There’s a small army of engineers that walks with the engine and single car as it creeps through the north side. Gates have to be unlocked, backyard equipment pushed aside, and — in the case of my gym — owners of cars have to be found. Seems that twice a week the train comes to a stop at the club while the management goes elliptical-to-elliptical asking people if they parked on the tracks. 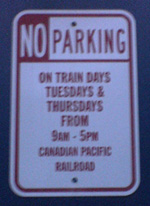 I stood outside with clearly-irritated trainmen as the massive engine belched and growled, mere inches from a car parked directly across its path. I struck up a conversation and urged them to exercise right-of-way, crushing the pathetic vehicles like matchbox cars. They declined. In fact, they eventually gave up and backed the train down the tracks to who-knows-where.

I love that this throwback train exists, but you have to wonder: wouldn’t it be easier to deliver the sugar by truck at this point? The train basically spends a full day inching through roadblocks that the city inadvertently lays across its way. I’d love to know what the actual story is. Why the train is still a better option for the candy factory.