Stirring the gene pool with a cello bow

There are days where my job is not much fun. Tuesday last week was not one of those days.

I spent the morning with Yo-Yo Ma and his Silk Road Ensemble paired with Dr. Spencer Wells of the Genographic Project. Actually, so did the student body of the Prosser Career Academy, a Chicago public high school on the west side. And this was all part of the Sister Cities Schools program.

Confused? It was a bit of a you-put-your-chocolate-in-my-peanut-butter event, but it actually worked. Sister Cities is a program that encourages multicultural exchange between the planet’s urban centers. Their new schools program extends this by putting students in contact from around the world. The Silk Road Project is a really interesting endeavor by Yo-Yo Ma to demonstrate the interplay of cultures via music, taking the ancient trans-Eurasia trade route as a metaphor for this journey. The Genographic Project in some ways has the same goals — a greater understanding of human diversity — but comes at it by seeking to more fully understand the patterns of human migration out of Africa by mapping genetic markers from people around the world. IBM’s life science group is providing the computational firepower for the massive amount of data that Wells and his team are collecting from the field. 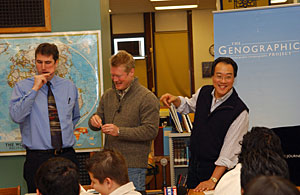 Yo-Yo Ma is a huge fan of the Genographic project. In fact, I think he has a man-crush on Spencer Wells. Together they spoke to an AP History class and explained the goals of each project. The students were given genography kits to plot their own lineage on the world map and Ma played a short piece for the class, explaining the multiple cultural influences that coalesce in classical music. His specific example was how an African dance was incorporated in a piece he played by J.S. Bach.

The full Silk Road Ensemble then entertained an all-school assembly in between video clips of Spencer Wells traveling to crazy remote places to obtain information and blood samples from indigenes. At times the yoking-together of genetics and music seemed a bit forced, but it clearly can be done and does make some sense conceptually. Genetic proliferation and lingustic variation, for example, are tightly coupled; one offers insight where the other falls short. Will be interesting to see if Ma and Wells can uncover other points of intersection between the projects.

The students loved it all, actually. A teacher remarked that she’s never heard a full school assembly so oddly silent. I suppose everyone wonders where they come from, ultimately. One of life’s meta-questions.

See also: Macro-genealogy and A long walk out of Africa

One response to “Stirring the gene pool with a cello bow”