A great last few days here in Austin. SXSWi has just wrapped up and I’ve got a bucket of notes, unvisited links, and ideas to sort through. Which is exactly the way I like it. Ingest complete, begin digest. Look forward to a few excreted posts in the coming days.

Twitter, oh my goodness Twitter, was the darling of the festival. Literally everyone was using it to catch up with one another or just buzz softly in the great hive mind. There were screens set up in public areas that provided a steady flow of tweets. It definitely took the place of the room-by-room IRC channels from previous years. In a way, Twitter is just really slow IRC. But you can already see where this is going. Eric Rice is right when he says that a fest like SXSW is perfect for Twitter (especially given the overloaded WiFi) but that the long-term usefulness of such a dump of minutiae may be questionable.

There was a lot about virtual worlds this year — more about that soon — but it wasn’t completely dominated by Second Life, which is good. There was a lot of buzz about an impending Google metaverse (what with the Earth renderer, Sketchup, and their purchase of Adscape Media). Of course last week’s announcement of Sony’s PS3 Home got a lot of people talking, mostly skeptically. And the Wii is simply adored.

Hardware DIY was big, especially given the deification of Phil Torrone for his Frogger hijinks on 6th Street last year. He and Limor Fried provided one of the keynotes. The Open Source Hardware movement is very interesting indeed. Fried demonstrated an illegal cell phone jammer to a room full of astonished geeks. I gotta get me one of them.

As always the best part of SXSW is what happens away from the convention center. This year’s dorkbot meetup was especially well-done. You simply can’t beat drinking free beer to the sound of humming tesla coils. Though the conference grew in size by almost 80% the parties didn’t seem any more crowded than usual. 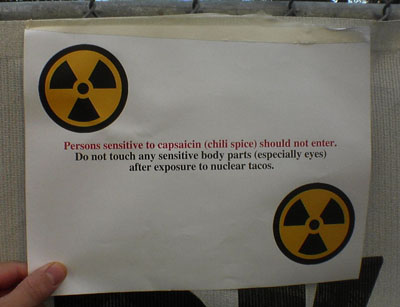 Should have heeded the warning

Best way to make a friend at SXSWi: pull a power strip out of your bag.

Overall, wonderful. I knew more people this year, but met fewer. I’d prefer to meet more, but that’s the dark side of an expanding social network I suppose. My only complaint is that the size of the fest is such now that they’ve had to expand into other, very hard-to-reach areas of the convention center. It made for long slogs from panel-to-panel and also cut down on the mingling.

Special thanks to my panelists, by the way. A great discussion.