There was a torrential afternoon downpour yesterday that caught all three of my kids — which includes my one-year-old baby girl — and their Ghanaian babysitter in the rain at the park. They got drenched. And they loved it, especially the toddler. Apparently this is good news, for in Ghana it is said that if a baby gets rained on and does not cry it will live a long life. Who knew?

My three-year-old boy, however, has a problem. A few weeks ago we were out for a stroll and we passed the neighborhood fire department just as the engines were preparing to roll. They laid on the sirens and that really loud, low bellow before they left the station. This noise, compounded by the soundboard of the open garage and the fact that we were approximately 20 feet away, scared the daylights out of my kids. My wife and I were startled too. It was like standing on the deck of an aircraft carrier. (Not that I’d know.)

Now, whenever a fire truck blares by — and this is often as we are on a major route out of the station — my three-year-old freaks out. Runs amok, hands covering his ears, shaking, scared mindless. It has gotten so bad that if he thinks something sounds even remotely like a siren (which in the city is like background radiation) he loses it or if he thinks there’s a likelihood of fire, say, because he sees open flame on the grill, he freaks. Pavlovian, yet heartbreaking. We’ve offered to bake cookies and head to the firehouse tomorrow to have him meet the nice firefighters and confront his fears. He’s less than sure about that.

I don’t believe there is any west African folk wisdom for this problem.

Update: Thelovelywife took Andrew to the local firehouse with a platter of cookies to confront his fears. 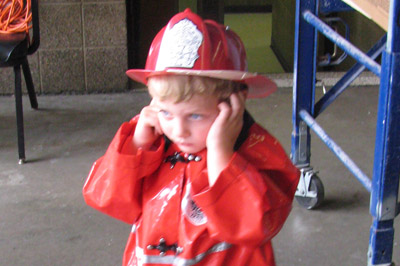 The firefighters were totally accommodating, letting he and his brother and cousin play in the engine cab and with the hoses. And yet, Andrew had his hands at his ears the whole time — scared that there’s be a fire emergency in the neighborhood at any time. And in fact there was. Engines rolled. Tears flowed.

One response to “Water and fire”