Microscopic to macroscopic, we’ve taken it the hard way across the full spectrum of natural world nastiness in the last two weeks. Powers of 10 gone bad.

Let us start with the tiniest of living evils, the virus. A few weeks ago we headed out on our first truly long-haul road-trip adventure and final hurrah of the summer. All five of us crammed into one car. Luggage everywhere. Fishing rods strapped to the roof. Hello, Clark Griswold. We left Chicago at 9PM on a through-the-night journey to far northeastern Oklahoma, a friend’s lakehouse. Strangely I had never considered OK to be drivable, but in fact the border is only as far from St. Louis as St. Louis is from Chicago. Doable, if miserable.

3AM. All three kids asleep. Bliss. Then, our one-year-old daughter awakens with a cough straight out of a horror flick and inhalation distress that was truly terrifying. She was sick, clearly. Wife says, that’s croup. Just a nasty little virus that we usually combat at home with a steamy shower, a jaunt out into the cold night air and/or medication. We had none of these. So, wife then says, we need to pull over right now. I agreed that we needed to, but, see, we were on the freeway squarely bisecting East St. Louis, the city that began the tradition of Illinois towns on the east side of the Mississippi being hellish mirror images of their counterparts on the other side. I protested, citing the well-being of all of us in the face of the well-being of one of us. But thelovelywife threatened my well-being if I did not pull off to assist our youngest and, you know, I’m selfish about my own personal safety, so I did. Here’s a short video I shot at this moment.

We survived this escapade but decided we had to stop over the bridge at the St. Louis Children’s Hospital. I went to grad school at Wash U. so I knew this was a quality institution, but I was unprepared for just how amazing it was when you need it, even in the wee hours of the morning. Still, seeing your toddler in a hospital gown is a troubling thing. Sleepless and with two other kids in their pajamas in the ER it was all we could do at this sight to keep our composure. She got some steroid shots and we were on our way. But we couldn’t go all the way to Okie. Just didn’t seem right with Typhoid Mary in the car. So we decided to re-route to Galena, Illinois a small town in far northwestern Illinois where my parents have a place. We rolled in at 8:45 PM the next day. Just 15 minutes shy of 24 hours (minus ER) in the car. More on this at the conclusion of this saga.

Scale up, if you will, from the dastardly virus to the sustaining yeast fungus. As a culture, we owe much to this little bugger, but I’m currently greatly dissatisfied with it. I decided to embark on a raspberry wine fermentation last weekend. (You may recall the bloody mess that was picking these delicacies on my parents’ property, the aforementioned Galena residence.) So I squashed and squashed. You can’t run these things through a grape press, alas, and have to squeeze them whole in a cheesecloth bag. It was open-heart surgery. 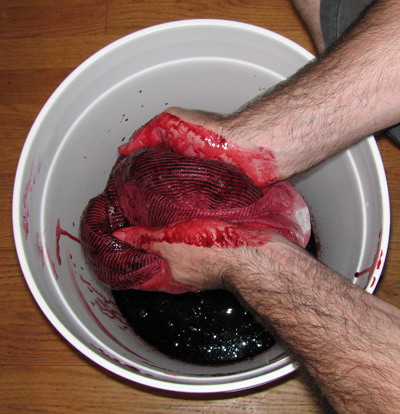 We ended up with five gallons of juice. It smelled heavenly. I added the sugar, took the temp, measured the specific gravity, had the concoction positively yearning for ferment then added the yeast and … nothing. OK, not a problem, might take a night. But no. No foam, no gurgle, no incipient smell of alcohol. This was a problem because I did this after the kids were asleep hoping to avoid their bacteria-laced touch and endless questioning. It was not to be. The next morning I checked the fermentor — still no hot yeast-on-sugar action — and my kids were all over the thing. I had to explain it all, which resulted in this classic quip from the six-year-old: “Mommy, mommy, did you know that yeasts are little critters that poop alcohol!?” I’ve done nearly everything I know to get the fermentation going, but as of today, no luck.

Scale up again to the charming urban indigene known as Rattus norvegicus. We’ve had a bit of rat problem of late. Early summer storms knocked our garage door off its track. We fixed it, but the fix left a gap at the bottom where the little nasties let themselves in nightly. We saw them scurrying out when we’d lift the door but only understood the extent of the problem when we peered into the corner where we store some of the 19 strollers we own. Rat shit everywhere. In every nook, every cranny. Son said “Hey Daddy, look at all the rotten raisins in the baby seat.” Um, not exactly. 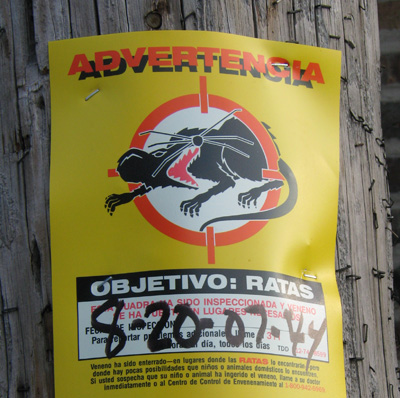 As soon as they banished the thoughts of the cute vermin from Ratatouille and Flushed Away the kids were immediately obsessed with helping me rid ourselves of the bastards. But of course, as with the wine, they had to be right in the action playing away in the rodent feces. I finally shooed them away and fired up the leaf-blower to shoot out the very last of the Bubonic particulate matter. Stupid. I was immediately in the eye of a small hurricane of enclosed, whirling crap. (Woke up the next morning with a sore throat and some truly Dickensian snot.)

No rat spotted as of today, though we’ve identified their lair in the foundation of the couch house next to us. Next weekend promises chicken wire and concrete poured into their holes. Take that, suckers! Good fun.

Scale up now from the natural to the Natural. As in Mama Natura. (Bitch.) And rewind to the aborted trip to Oklahoma. We’re on our way to Galena moving up the western edge of Illinois through such metropolises as Peoria, Galesburg, and Savanna — a trip worthy of a Sufjan Stevens album. Just two hours from the blessed relief of a home we know the skies turn apocalyptic. Wife and I were barely coherent from lack of sleep. This was hour 22 of 24 awake. It all went straight to hell as an amazing supercell unloaded on us. We were on the Great River Road that snakes up the Mississippi through tiny towns so at least one cardinal direction, west, was cut off for our escape route should we have seen a twister. Luckily we didn’t but it was a biblical torrent. In a way maybe it was a good thing. The adrenalin powered us through the last hours of our odyssey from St. Louis in our roving petri dish of a car. 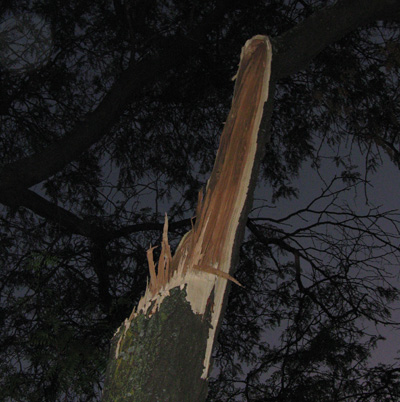 Moving eastward these storms were on a bee-line for Chicago. They slammed the city as we all convalesced from our road trip in Galena. We didn’t realize the extent of it until we arrived home that Sunday. There was evidence of the maelstrom everywhere: trees down, transformers blown, standing water. We arrived in time for our annual block party. A small affair, literally one block of the thousands in Chicago. The funny thing is that because of the storm one side of the street had power, the other had none. Being rather neighborly around these parts about a dozen homes from my side had strung extension cords across the street to power certain vital gizmos on the other side. This ad hoc wiring was made more surreal because there were no cars on the block due to the party. I’ll remember this show of support when we’re all irritable and threatening each other with a shovel-based death for parking spots come winter.

Scrolling further out I’m sure you can find a meteor headed straight for my home, but this has not happened yet so please post it as a comment when I am but a mixture of carbonized ash and interstellar dust. Thanks.