How not to run a marathon

And I don’t mean the kind of running that takes two legs and an iron will. Yesterday the Chicago Marathon fell apart.

Among people who submit their bodies to long-distance running, the Chicago Marathon is consistently a favorite. Flat as a pancake, super-scenic, lined with cheering throngs, and great weather … well, usually. Yesterday the thermometer topped 88°F and it was disgustingly humid. A terrible day to run a marathon. An even worse day to run a marathon filled with first-timers and novices.

My wife ran about ten miles of the 26.2 as a unregistered supporter for a friend. Those ten miles were not continuous as she, like thousands of others, had to bow out at various points because the conditions were so brutal. People were dropping like flies. The omnipresent cheering that makes this race so much fun was accompanied almost the entire route by the sound of ambulance sirens.

The race organizers had a number of tough decisions to make yesterday. Run the race at all? When is enough enough? And, hardest of all, what to do for the runners who could clearly make it to the end? 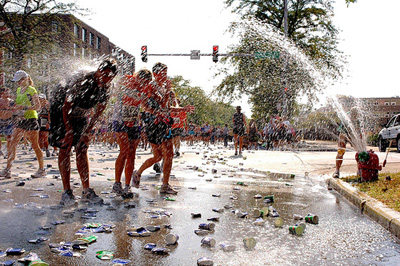 They let the race go off. The heat climbed fast. Discussion forums are alight with charges of empty water stations along the route* (and just as many saying they were stocked just fine). But clearly it was dangerous to let the race go on. At the halfway distance at about 11:30 (3.5 hours after the race started) runners were told to stop and were re-routed back to the start. Huge bummer for the participants, I’m sure, but if you’ve only run 13 miles in 3.5 hours something is clearly wrong so I don’t have a huge problem with this decision.

But then, shortly thereafter, around mile 20 police got on bullhorns: “Attention runners, the marathon has been canceled. You can stop running, now.” Can you imagine? If you’ve made it this far you’re going to want to finish. And can they really make you stop? They could close the course, but they can’t make you get off the sidewalks.

The organizers say this was done because of fear of the runners’ safety. Others are claiming that it is because the city was out of emergency service vehicles (402 people were hospitalized as of last night) — which of course is the same thing with a twist.

Either way, this is hugely disappointing to anyone who cares about a Chicago Olympics bid. If I were Mayor Daley I’d be livid. Every sporting event this city hosts from now until 2009 needs to be organized and run with laser-precision. We need to show the world that we can run a massive event and protect our athletes.

[*] And before you ask, no, my wife was not contributing to the water shortage. She was a bandit, but a bandit with her own refreshment.