Two weeks ago, in addition to launching a project, I was in DC to meet with a bunch of people that work in the relatively new field of technology-juiced humanistic research. You scratch your head at that — and fair enough. The field is barely a decade old.

When I was in English graduate school in the mid-90’s I envied the small group of university researchers who cared little about the conventional wisdom of left brain-right brain and who pounded down the doors of their engineering and computer science colleagues across campus to start what’s loosely known as computational humanities. It isn’t a hard concept to grasp, though I am sure you are imagining tweedy, bespectacled bookworms accidentally reformatting DOS drives. There’s a lot of truth to that image*, even now, but like any stereotype it exists only as counterpoint to what is actually happening outside the mainstream.

This is no place for a history of the field (though that would make an interesting monograph). Suffice to say that, in my mind anyway, the grand-daddy of these programs is the Institute for Advanced Technology in the Humanities at Virginia. I’ll offer one example from IATH that I think well-defines the kind of new knowledge that can come from the you-put-your-chocolate-in-my-peanut-butter mashup of computers and the humanities.

It is called the Digital Forma Urbis Romae Project and is led by David Koller. 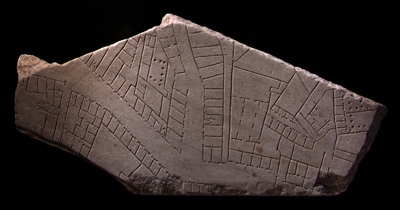 In ancient Rome there was a gigantic marble map of Rome that displayed every road in the city including internal layouts of buildings. This map, called the Forma Urbis, was pulled down and fragmented in the Middle Ages for scrap — and the world lost a perfect snapshot of the way Rome was. Thousands of the fragments of this map have been found scattered in digs all over Rome. For 400 years scholars have been manually attempting to reform this 3D jigsaw puzzle, and not very successfully. What Dave did is scan every single known piece in three dimensions and then build a few different algorithms for matching them up. He was able to piece together much of the map, doing in a few weeks more than had been done in centuries. The picture of the municipal layout, architecture, and patterns of life that the map depicts are an invaluable resource.

There’s more than IATH, though. The University of Maryland also has a cross-disciplinary program called MITH for, yes, the Maryland Institute for Technology in the Humanities. Judging from the fact that they asked me to speak there you might think the work they are doing is qualitatively less impressive than IATH’s. But you would be wrong. And if you still doubt, have a listen at all the tough questions they threw my way at the end of this recording.

Not to be outdone by academia — or rather, in order to ally forces — the NEH has a digital humanities program aimed squarely at supporting projects that put technology in the service of humanist inquiry. Most recently they are working to match up researchers with supercomputing resources, some at the Department of Energy (you know, the folks that have those nuclear explosion-modelling boxes**).

That’s the next frontier, really: what can you do with a truckload of data and an enormously powerful computer? Definitively prove or disprove the authorship of Shakespeare? Map out the journey of an idea across all known writings/art through the ages? Reconstruct a collapsed temple from thousands of pieces of heaped stone? Researchers are only just beginning to ask these questions in a way that is not rhetorical or just a flat out joke. What can WOPR do for you?

[*] It isn’t just humanities scholars. My neighbor in grad school was a computer science professor who would occasionally come over for basic Windows help. He didn’t even use a computer. All theory, all math, he taught.

[**] I have this funny image of a English professor politely asking a nuclear physicist to pause his simulation at 100,000 casualties so that he could load his corpus of Emily Dickinson writings into the supercomputer.