Continuing the finest set of post titles in years, I now give you The Goblin Cock. It is, perhaps — nay, back up — it is certainly the finest culinary concoction I have ever come across. 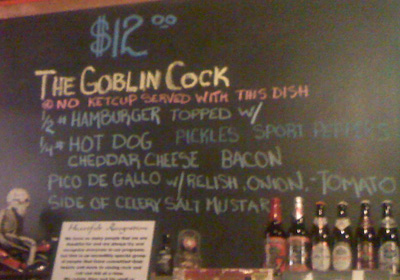 Some background. Thelovelywife and I pawned the midgets off on my parents in the ‘burbs, so we had a “free” night. Said wife had been hungover all day after sailing through the perfect storm of girl drunkeness the night before: lots of girlfriends sitting in a circle bitching about others where wine was plentiful. She was hurting 24 hours later and desperately wanted a burger. So my brother, who makes a career of going out and sampling what the city has to offer, informs us that the best burgers in the city are just a few blocks away at a bar called Kuma’s Corner.

The menu is a vegetarian’s nightmare. Consider only the Slayer: fries on top of a half-pound of beef with chili, cherry peppers, andouille sausage, onions, cheese, and anger. Presumably this last ingredient is actually a description of your digestive tract’s reaction to the dish.

All the burgers are named after heavy metal bands (death, nu, thrash … I’m not a student of the sub-genres). And this is all the bar plays, loudly. The waitstaff clearly loves it, though I’ll say now that it did not exactly help my wife’s pounding headache. Yet the promise of the food kept us there, despite the sonic assault.

So, back to The Goblin Cock. Read that chalkboard again. A half pound burger slapped together with a quarter pound hot dog (which is huge), pickles, peppers, cheese, bacon (!), pick de gallo, relish, onion, tomato and a side (in case you’re picky) of mustard. True to Chicago form, ketchup is not allowed since the monstrosity has a hot dog on it. (In fact, they can’t even spell ketchup correctly the thought of it on a hot dog is so troubling.) No Blister Nuts, alas, but if one were to suggest it to them I bet they’d not be averse.

Encased meat as a garnish. Does it get any better than that? Perhaps not, but I was not man enough and merely got a burger with a fried egg on it. Even now though, hours later as I wrestle with the consequences of such a gut bomb, The Goblin Cock beckons me back.

This bar is not for everyone. They have an angle and they grind it. An enveloping blanket of noise, no mass-produced beer (except PBR, bless their hearts), and food prepared angstfully. But the bartenders and waitstaff were very personable and attentive. Highly recommended.

One response to “The Goblin Cock”