It is clear that I have thoroughly demolished any semblance of circadian normalcy here in China. It’s tough enough that I am +14 hours from my normal biorhythms, but the last two days I was here I actually had no appointments, so could work on whatever schedule I wanted. And so it is that I now sleep twice per 24 hour cycle. There is no day, no night, just a hotel room with the shades drawn and a very perplexed room service staff. I wonder if, in the absence of external cues and busy schedules, two shorter sleep periods is the body’s default. Should be fun resetting at home tomorrow.

OK, I did make it out into the sun once. (It burned, but I made it back to the crypt quickly enough.) I was on a mission to the Ya Show Market, a vast indoor agglutination of wares that is best described as a dozen flea markets shoved into a tenth of the space that human decency and fire codes should permit. It is, in short, several of my own personal hells layered right on top of one another.

I was in search of purses. If it is leather, you can put things in it, and it has a brand logo on it, I was instructed to buy it. Designer knock-offs. (C’mon, it isn’t like I was buying a deep fryer or a LASIK machine. You get what you pay for. These things self-destruct almost on cue about six months post-purchase. It is like there’s a dissolving suture that binds the whole thing together and one day, poof, it all falls to hell like the car at the end of the Blues Brothers.)

I’ve done this before. Many times. I’m no rookie. But I still hate it. And going in there alone (as a male caucausian) is reckless bordering on moronic. But I do love my wife and she do love her girlfriends, so there I was. Here’s what happens. You walk in and you’re immediately assaulted, casino-like, with the sights and sounds of money changing hands. Merchants slink out of stalls and solicit your interest whether you look like you want to buy a crib, parachute, or watch that hasn’t told time since Zhou Enlai was premier or not. More formal than, say, an Egyptian bazaar; less easy to go undetected than, say, suicide watch in a prison. But then again, I had made it through the Night Market without puking so anything was possible. 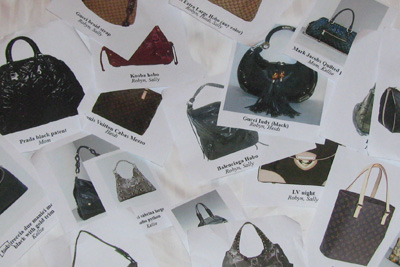 This time I came prepared. I got all my wife’s and her friend’s purse choices, including what variations of color and shape they would permit. I printed them all out at the hotel and cut them into little playing cards which included the name of the who wanted what. I also created a single sheet with all of the same. Then, I found a merchant and handed him the cards. He quickly parsed through what he had and handed what he didn’t to me, whereon I handed that smaller stack to the next merchant and so on until all my cards were gone. The merchants all scurried off to back rooms where they keep the bulk of the stuff. I waited, consulting my master sheet, pen in hand, as other Westerners gazed on at my obvious mastery of the system.

Well, mastery to a point, the point of purchase. I certainly got what I came for. But my haggling position was somewhat compromised by the obvious fact that all I wanted to do was get the hell out of there and, more so, by the very elaborateness of the system itself. The key to haggling is seeming not to care and who the hell prints playing cards for purses if they don’t care whether they get a few or not?

But I tried. And I got the price down to about $40/per. My boss, for instance, who has left dumbstruck merchants in her wake on at least four continents, could probably have walked away with the purses for $10 each. But see above, getting the hell out. I emerged into the daylight with two trash bags full of purses. I wanted to run, as I felt like a smuggler. Unclean. Haggle-weary.

Now to sell my playing cards on eBay.