End of the Ride?

We have a second car, a 1994 Honda Accord affectionately referred to as MySweetRide, which I’ve not taken great care of. It’s never seen the inside of a garage, braving the elements in the Deep South and the Fucking Cold North. I don’t drive it very much, but it comes in just handy enough to keep around. At least until we have to make any kind of serious outlay of cash for it. Which may be soon.

You can hear the car idling on the street from my basement. There’s a gaping maw in the dashboard where the stolen stereo once lived. A short in the driver-side door keeps the dome light on. Every hinge creaks like a drawbridge and there’s enough decomposing flora in the shelf where the trunk shuts to compost a medium-sized garden.

And yet, she is loved.

2AM Sunday morning. Awakened by a phone call from friend who had the car*. A screw had punctured a tire and put the trusty steed out of commission a few miles away. (Ironically, the car was being used to transport home a bike that had just gotten a flat tire.) We jacked her up, unlugged the nuts, and then … could not get the damn tire off. Like me, it just didn’t want to let go of the Ride.

We left her for the night. 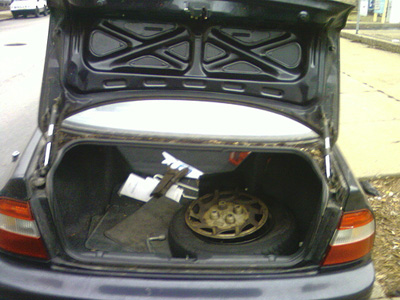 In the cold light of day we lubed her up and still could not get the tire off. We were about to give up. Just then — and I swear it was quite honestly right then — the dirtiest tow truck I’d ever seen drove up and out leaned a similarly hygienic individual asking if we needed help.

Aw, hell, he’d seen this thing before. He got out of the truck, walked up to the tire and kicked it as hard as he could. Nothin’.

No problem. He reached back into the cab of the truck and pulled out a baseball bat that clearly had a few stories to tell. He scooted under the car and swung for the fences behind the tire. Voila! Off it came. And away he drove, our guardian angel Cooter of Hazzard County.

Of course, the spare was flat. Probably should have seen that coming.

It’s all good now, but it does have me wondering if 2008 is the year I need to put MySweetRide out of its misery.

* You may remember that MySweetRide is at the center of an informal car-sharing service and, as such, has its very own Twitter site.

Update: Due to an overwhelming number of requests to help out in some way (one comment so far) I’ve added a Donate button. The money is pouring in ($1 so far).