I’ve been a cataloger of nouns used as verbs since Jeff Spicoli opened my mind to the possibilities with “hey bud, let’s party” in 1982. There’s “google” and “calendar” and “lunch,” but the original utilitarian nounverb has got to be “smurf”.

The children over here are all about Apple TV and they recently found the Smurfs cartoon. The show was way before their time and slightly after mine (I’m a product of The Superfriends and Scooby-Doo, thank you very much) but it captivated them. So last night, post-concert, home alone, I watched a few episodes. Like a chill-out room at a rave. 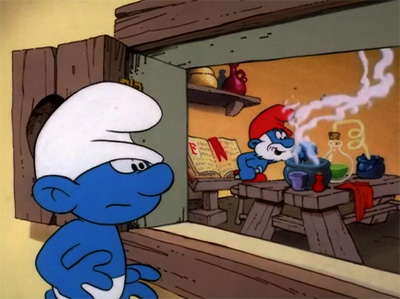 Here is a lexicographical analysis of a single episode, called “The Smurf’s Apprentice,” for the varied uses of the word “smurf”. You can, in fact, get the gist of the whole show just from these lines.

“Watch where you’re Smurfing!”
“Smurfic acid”
“A half-Smurf of burnt siena”
“Three Smurfs of sarsaparilla leaves”
“Now to see if the experiment Smurfs”
“I’ve finally Smurfed spontaneous germination”
“I have a real gift for Smurfin’ magic”
“I want to Smurf magic right now”
“Now’s the time to Smurf a look at his magic book”
“What are you Smurfing in here?”
“A Smurf of quicklime”
“Smurf over a low flame”
“A monster! Smurf for your lives!”
“I Smurfed a magic potion”
“We’ll have to Smurf something else”
“You mean i’ll be this way for the rest of my whole Smurf?”
“I’ll find an Anti-smurf and i’ll call you”
“Smurf it, Grouchy!”
“Smurf’s-eye!”
“I need volunteers to Smurf me three hairs from a cat’s tail”
“We’ll all Smurf you a hand”
“The rest of us will start making the anti-Smurf”

Gerunds, exclamations, even an adjective in there. Does English have a word this useful, a Swiss Army word? I suppose certain expletives might work. Go ahead, swap out “Smurf” for “fuck.” Doesn’t quite work, but will make you smile.