Get in a cab in Chicago and chances are better than not that your driver is from West Africa — often Ghanaian, usually Nigerian. In my experience they know the city as well as other drivers, if not slightly better — certainly better than I do.

And this is why I am utterly perplexed at what I now understand as bald fact: Ghanaians in Ghana are terrible at estimating distance. Ask three Ghanaians how far from points A to B and you will get wildly different estimates. Five minutes from one person versus thirty minutes from another is not unheard of. But even when you ask for distances in units of length you will get absurd variance, or no earthly idea at all. Far versus not far. And not far usually ends up being at least 30 km.

This person says Kumasi to Accra is 2 hours; that person says 6 hours. One of these people is wrong.

I heard a Ghanaian refer to GMT as “Ghana Man Time”. Cracked me up. (By the way, I was bisected by the real GMT yesterday.)

It isn’t just distance and time. Today I headed out on my own to arrange a dinner with some students from Michigan Tech working in Accra. I grabbed a map of Accra that had on it the restaurant I wanted to go to. I approached a cabbie who looked at the map. He flagged another driver, then another, then another, until I had a small crowd gathered looking at my guide book. Much excited chattering in Ga (different language here in Accra; my Twi was useless — or, rather, more useless than normal).

Finally it dawned on me. As politely as I could I asked “You don’t know how to read a map, do you?” They immediately all confirmed that the map itself meant nothing to them, though they easily read the labels and words. They were obviously not illiterate. Just cartographically illiterate.

Now, I understand that it is sometimes hard to abstract one’s street-level knowledge of a city to an aerial version of the same. It is a puzzle to be solved, a kind of cognitive transform that involves whittling 3D to 2D. But someone whose job it is to actually know the city you’d think would have this ability.

Perhaps one aspect of the Ghanaian inability to judge distance/read maps/know the location of anything is that streets are very rarely signposted and, if marked, not really known by name. See, even though the drivers could read the street names on my map they had never heard of any of them. It’s all so very bizarre. 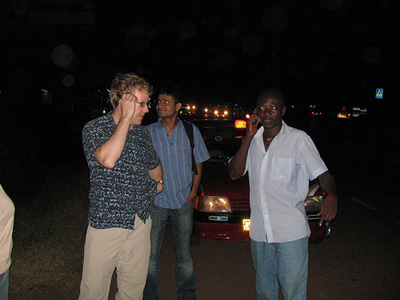 Here is a typical cab experience:

“Can you take me to Tante Maria restaurant?”

“Do you know where that is?”

[drive along aimlessly for 20 minutes]

“Do you know where we are going?”

[drive along for 20 more minutes, generally back the way ye came]

“Are you sure you know where we are going?”

[Taxi stops. Driver gets out and randomly polls people on the street for directions. Gets back in. Drives for 20 more minutes.]

This last sequence — the stop-and-inquire — typically happens at least three times per journey. Usually the outcome is that the cabbie ends up not only not knowing where he is going but usually not even where he is. It is at this point that you cut your losses and bail out.

Clearly this lack of spatial awareness is not something biological. Ghanaians in the US do just fine. So it must be cultural, something about Ghana itself that causes spacetime to warp. Like the island in Lost.

One response to “Off the map”