I’ve heard Ghana called “Africa for Beginners” mainly because it is relatively stable, economically promising, and English-speaking. Yet it is also not the Africa of Western, romantic stereotype. There’s no Heart of Darkness-esque jungle, no Lion King savanna. Ghana once was mostly rainforest, but logging and farmland creation mostly denuded the landscape in the last century.

Still there are patches, now protected. One of the best is Kakum National Park, just outside of Cape Coast a few dozen clicks from the beach. We visited Kakum on Saturday. It was breathtaking. Sublime in the true sense of the word: beautiful and terrifying. 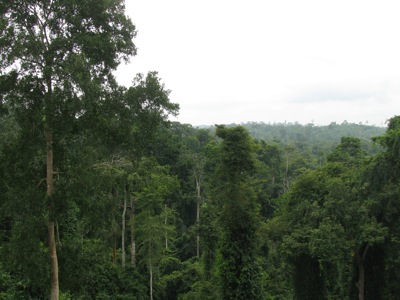 Apart from the wildlife — which includes such rarities as pygmy forest elephants (I had no idea such a thing existed) and a crazy diversity of birds — the park’s main attraction is an elevated rope bridge walkway right through the tree canopy. It’s an amazing thing. You set out on it just a few meters above the ground and are several hundred feet above the forest floor before you realize you can’t turn back.

It’s all rope and wood plank and with the exception of the rusting steel wire brings immediately to mind the scene from Indiana Jones and the Temple of Doom where our hero hacks the bridge in two. 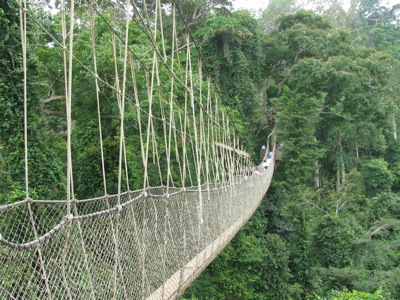 There are seven bridges in all, stretching more than 1000 feet between gigantic trees on which small viewing/rest platforms have been constructed.

It was all built in 1995 by shooting rope via crossbow from tree to tree, then scaling the monsters old school, ground-up style and rigging the rest. You don’t question the engineering as much as the 13 years of maintenance. Things deteriorate quickly in a rainforest. Also, big as the trees are, once you land on the platforms there’s a noticeable sway — emphatically not the thing you want to feel having just crossed the chasm. It’s scarier than it seems.

There isn’t a whole lot of wildlife-viewing up on the bridges. Mostly you’re battling the sweat that threatens to compromise your grip on the rope “rails” and hoping no one on your stretch panics.