Fall decided to arrive, aggressively, while I was gone. That means a few things: making fires, making booze, and making a plan for our annual holiday party. All of these take the chill off the city’s mad dash to winter.

We had our chimneys swept today for the first time since 2002. I had hoped for a small, sooty Gamfield who’d hoist himself onto the roof and into the chimney Santa-style. Alas, even your most cherished 19th century images of child labor have been superseded by technology. Basically a couple of very clean guys shove a cross between a pipe cleaner and a vacuum cleaner up the flue, turn on a machine, and stand back. Apparently our downstairs chimney looked like an emphysemic lung.

For those of you interested in what I finally did about procuring firewood, it turns out that both companies we called in Chicago adamantly do not take down live trees for their stock. Basically they both said they follow loggers around and take the tops off the trees that they leave for dead. Both thought my wife was nuts for asking for an all-elm cord and offered up a window into their supply process when she explained why. A good lesson for us in the upside of simply asking.

‘Tis also the season for things frightening, such as a five-year-old’s birthday party on Halloween. But really it means a great excuse to catch up on a backlog of horror flicks. My love of the genre has recently taken a sidetrip into the small world of sci-fi/horror video games. I had read great things about EA’s Dead Space, a first-person shooter set on a derelict spaceship and filled with all manner of nasties. Now, even though I’ve been deeply immersed in virtual worlds (direct descendants of 3D video games) I have never actually owned a game like this. 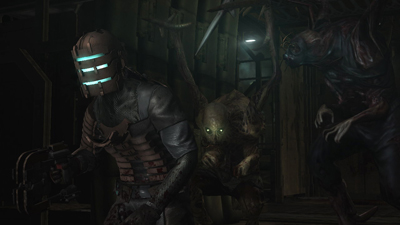 Truth is, it is scary and all for the reasons that the best horror films are. It is about what you don’t see, what you do hear, and what you think might be around that next corner. I have little to compare it to in the game genre, but as an exercise in finally being able to get the imperiled protagonist to run from the monster when you know they should, it has been very enjoyable. (Not at all kid-friendly, I might add. A few minutes of them watching me and my wife was contemplating therapist appointments for us all.)