In the past year I’ve found myself becoming more and more interested in restoration ecology. I’m not an ecologist or a naturalist or even very environmentally-savvy, but I am working on it and it seems to me that the practice of restoring an ecosystem is a useful way of thinking far beyond its own application.

Malcolm McCullough, professor of architecture at the University of Michigan and one of the leading proponents of place-based interaction design, ends his fantastic 2004 Digital Ground with this historical blurb:

The expression going native apparently originated in nineteenth-century India …. [I]t began as a description of Englishmen wearing loose-fitting pajamas in public. This sensible adaptation to the sultry climate was seen as a token of deeper assimilations, particularly intermarriage, which the expression came to represent. Such practices were common enough amid mercantile colonization in the eighteenth century, but as foreign traders became rulers, the accompanying social tensions made assimilation taboo. Thus to the imperial British of the nineteenth century, “going native” was a crime. It represented a lapse of discipline and a descent into chaos.

This taboo pervades American culture today. To “go native” is to go niche, to be deliberately different. However logical it may seem, going native rubs up against one’s own cultural sensibility — and usually loses. 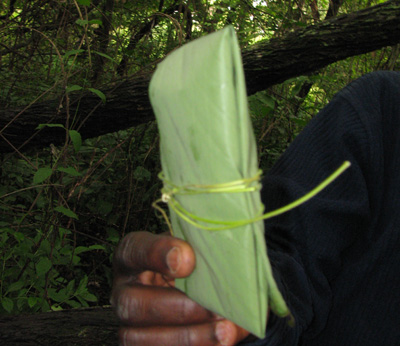 Waterproof envelope made from a leaf, Tano Sacred Grove, Ghana

It doesn’t often happen this way, of course. Design itself in the west is a semi-sanctified endeavor. The artist receiving divine, solitary inspiration: this is a myth that won’t die. (It may work for fine art, though you can argue that there’s no such thing as an artist immune to external influence.) Nothing happens in a vacuum.

William Morris said “you can’t have art without resistance in the materials” and he wasn’t talking about hitting a knot while whittling. Resistance here is merely constraint on free-form design and almost always a good thing. You may not produce a photo-realistic drawing with most of your crayon box broken, but you’ll certainly have to work harder. And hard work usually pays off.

So how does this relate to restoration ecology? Well, the living world itself is the world’s longest-running design charrette and if it and its engine of creation known as evolution have taught us anything it is that constraint over time produces the most lasting products. (Also, at least one pretty engaging game.)

The natural environment has for most of evolutionary history been the constraint under which life’s creative experiment has been run. Climate, geography, predators, food availability — all are pressures that snap the crayons in the box, factors that have culled the palette of what would have otherwise produced an infinite and totally unsustainable variety of life.

Luckily, the world is a harsh place. Just to survive is amazing, but to produce something beautiful or unique is astounding. Evolution is the perfect marriage of an indefatigable artistic drive and an unrelenting set of constraints. You could say that neither “wins” (an equilibrium, if punctuated) — or that they both win, always.

But that’s only in the scenario where naturally-produced constraint is the sole factor. And that, of course, has not been the case since evolution’s Mona Lisa — homo sapiens — slyly smiled its way onto the scene.

You might argue that human constraint is a natural constraint too. And I’ll buy that to a point. But the scale and scope of the impact of human beings on evolution — both negative (like pollution) and positive (like conservation) — vaults it into a new classification in my opinion.

For one, human behavior introduces all kinds of new variables into evolution’s experiment (e.g., the Aral Sea desertification). But more importantly, our impact on the natural world has divorced our adaptive behavior from natural constraint. Technology (or tool-making, something that makes us human in the first place) has greatly mitigated the effect the natural environment has on human behavior. People rarely need to go native.

Yes, when it is raining out you’ll grab an umbrella. Yes, when there’s a hurricane headed your way you’ll (usually) get the hell out. And it is true that human intelligence makes it impossible to conceive of a planet where we don’t modify our behavior in response of the environment.

Yet, it is the little things that add up. I think we can all agree that detonating nuclear bombs is a negative influence of human behavior on the natural order. But what about suburban lawns? How many people know how much water and gasoline they take to maintain and how many species native to the environment they simply cannot sustain? And this is merely the example most pertinent to restoration-based landscaping.

The point is merely this: natural constraint never goes away. The environment, the sum of natural phenomena, will always trump human artifice. Nothing built lasts forever. And since neither are we humans going away (fingers crossed), it is in our best interest to figure out how to balance this constraint with our own needs. We need to learn how to go native intelligently.

I’ve written previously about how I think Africa is a model here. Most Africans don’t have the ability to live beyond the constraints that the environment puts on their behavior. To be sure, this is the source of much woe and privation in Africa. But conceptually — consumption in line with an environment’s ability to sustain production — it is a behavior well worth imitating. It is, in short, a recipe for innovation.

And that’s why I am fond of my father’s project to return his lawn to native Illinois prairie. Yeah, it looks cool. And we get a visceral thrill of burning it down periodically. But the beauty is that it is a constant reminder of balance between human need (oooh, pretty!) and ecological compatibility. Evolution took a long damn time to figure out which flora and fauna could be successful in the Driftless Area of northwestern Illinois. Why on earth would we think we know better?

Our new prairie is a microcosm of behavioral equilibrium. On one side of the scale is the fact that it isn’t a real prairie, only a human-engineered approximation of one that suffers the challenge of artificially depleted biodiversity (one lawn ain’t gonna make all the native species return, especially if they are extinct) and also the challenge of being a native moat encircling a very artificial human-built house with all its environmental contributions. On the other side is the good news: no watering, no mowing, and most importantly a landscape that once again sustains the native animal life that evolved needing it.

This idea of balance, of “sensible adaptation,” of smartly going native, needs to be scaled up. It needs to inform all our decisions as de facto stewards of the planet. There will always be trade-offs, precisely because humans have extraordinary needs and an extraordinary capacity to make things better. Restoration ecology alone will not save the planet, but the ideas that undergird it just might.

This entry is cross-posted in a slightly-modified form on Prairie Works.