Where’s the map view for my calendar?

Over the holidays, after the deadline for online shipment had passed, I scampered about buying gifts in the real world. Department store staff, clueless bag-laden tourists, hateful too-loud Christmas tunes — it was all misery. But one particular misery seemed avoidable to me: there was no easy way to have a consolidated view of my schedule of shopping stops overlaid on a map. In other words, why if all my calendar events have a place associated with them could I not have a map view of my schedule?

Google has my calendar and obviously they have maps, so where’s the love? Likewise my iPhone. Of course, an app developer has thought of this. Sorta. Arrive will take your calendar events and give you the one-click ability to view an event individually on a map (assuming you’ve loaded anything into the location field.) But one-at-a-time viewing of events on a map really prevents the kind of route optimization that I envision.

The other instance where such a feature would be useful is when traveling — that is, when physical location and distance are less known to the person. It’s hard to plan a day when you don’t know where things are. It was in this situation last week in DC that I tweeted my dismay that such a feature or app did not exist. 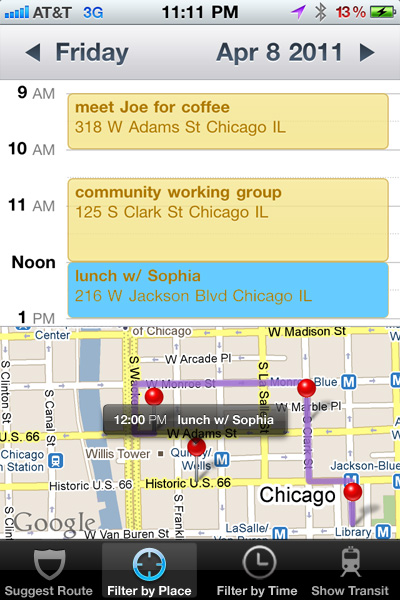 So I mocked something up. Really it is just a mashup of the iPhone calendar and map views, but the power of such a feature comes from the route suggestion and ways of filtering. Certainly one should be able to filter by calendar (i.e., show me only work items) or by time (i.e. constrain to 1-4pm today). The more powerful direction would be to constrain a time period’s locations to essentially rearrange your appointments within a given physical radius.

The most powerful function — one that already exists, just not in an integrated way — is to have the system optimize your route for you, suggesting potential reschedules or changes of venue to best fit a day together. Obviously there’s optimization that could happen to reduce transit time, but you could imagine forcing it to show you routes that were most or least walkable (ala Walkscore) or, as Google just recently added, routes that use public transit but minimize your time waiting outside.

The real power here would come from being able to add calendar events directly from the map view — and vice versa. Ideally there’d be no switching out to either standalone app. Or, it could be just another view in the calendar itself: day, week, month, list, map.

Ultimately this is a very specific example of how application developers use old, often physical organizational metaphors (calendars, maps) that silo activities rather than working across data to get at what people are trying to accomplish in the first place. And it isn’t just application developers. Substitute product designers, architects, urban planners, or just about any other design profession and you’ll be able to think of similar instances.

OK, then. Time to build this.