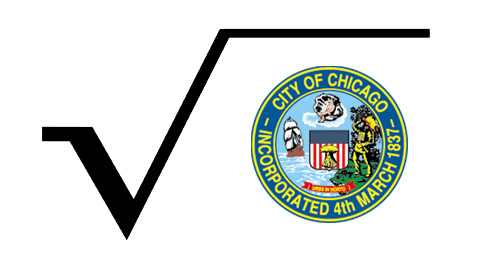 Recently, as we sometimes do to fill time, my family and I were asking each other trivia questions. My six-year-old daughter piped up with one from left field that made me laugh out loud — then had us thinking for the rest of the evening. She asked:

What’s the square root of Chicago?

Didn’t have an answer for that one, but it was ready-made for my Twitter followers and they did not disappoint.

The literalists looked at ranking and square mileage, but perhaps this town if squared might be us:

Some took a geographic angle. Logan Square, the Loop itself and my favorite:

@immerito Fort Dearborn. It was a square. Planted the roots of our city. twitter.com/tomkompare/sta…

The most interesting approach was formulated by Seth Lavin. He put it two ways:

For the verbal minds, it’s whatever makes this sentence true: “In Chicago, we blank blank.” (e.g. we reform reform)

It’s a head-scratching formulation, in some ways. What thing, what action, what verb does Chicago do to the same thing, action, verb that makes this city uniquely us?

No clear winner to my mind, but I sure did like Josh Davison’s wordplay: “polish Polish”. As in polish off Polish sausage. My wife noted that the reverse has been historically true with Polish housekeepers being employed to polish things (among other tasks).

All good fun, of course, but this exercise may be an epiphenonemon of the very real debate over whether cities can be mathematically described in a useful way. That’s quite another post. For now let’s revel in the oddball question of a six-year-old kid.