What the public way means in the networked age

Let’s start here. I want our relationship with public objects to feel like this.

But let’s back up to a street scene in Chicago in the late 1930’s for context.

You’re walking at a clip downtown because it’s storming. You hunch over and tilt your umbrella into the sheeting rain as people scamper for cover and taxis. Luckily your destination is this building and you know, thanks to having walked this route before (and a clever architect), that you don’t even have to look up to figure out that you’ve arrived.

On both the Clark and LaSalle sides of the Field Building (as it was originally known) are symbols in the sidewalk pointing to the entrances. F for Field, arrows for which way to turn. 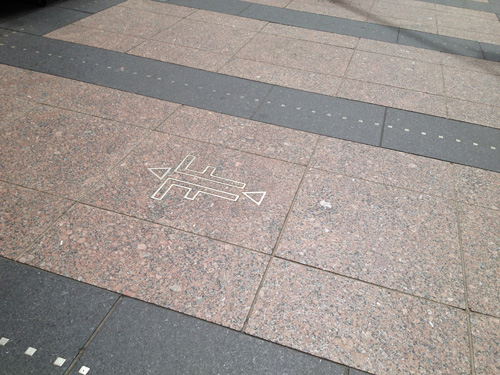 If noticed at all, these small, plain sidewalk icons could easily be mistaken for architectural decoration. But they were designed specifically around the umbrella use-case.

You may also have seen compass markings in the sidewalk just as you step out of a subway stop. Easy to overlook, but incredibly useful if you’re disoriented emerging onto the surface grid.

These examples represent embedded, passive information that’s not screaming for attention but placed precisely where you might need it. It’s information design in the physical architecture of the public way.

Today there’s a new usage scenario. You’ve seen it a thousand times. Urban pedestrians staring down at their smartphones, half-in and half-out of the moment in what Amber Case calls “temporarily negotiated private space”.

Maybe the F-marks would be missed by these otherwise engrossed city-goers, but they are a great example of ambient information in city environments. And we’re going to need a lot more of that as we increasingly negotiate our public space through a mixture of physical and digital awareness.

What’s new is the sheer volume of mobile, networked technology in our public spaces (and everywhere else). It’s an opportunity to “embed” information in new ways and to customize it to very specific places and moments in time.

Typically sensors and wireless connectivity claim the spotlight in discussions of the networked city, but I’d argue we’re missing a real opportunity not to use new technology to make the built environment more legible.

Most obviously, embedded digital information can aid in safety. The video of the girl in China on the phone falling through the sidewalk is one end of a spectrum of examples, most of which are instances of obliviously texting pedestrians falling off piers, walking into traffic, or smashing into one another. And it’s probably getting worse.

Rudimentary systems that might prevent such calamity do exist, but with a focus on motorist, rather than pedestrian, alertness at crosswalks. Crosswalks and Xwalk both flash lights to make the zebra stripes more prominent. You could imagine a more nuanced system which assumes pedestrians are looking down (at their devices) and flashes or changes color when the traffic signal is about to turn green. Interaction with devices via Bluetooth or NFC is not inconceivable either. Scenario: if the device is engaged in use, assume distraction, and alert accordingly. A responsive public way that’s in a positive feedback loop with its users.

Accessibility is another category of use for the responsive public way. Crosswalk design for the visually-impaired is not a problem for individual intersections — high-pitched chirping signals — but it doesn’t scale for large cities. The cacophony of a city full of bleating traffic signals would be the kind of noise pollution that causes New York City to impose fines on honking motorists. But if the crosswalk itself was open to digital development you could imagine white canes, phones or other personal devices alerting the visually-impaired pedestrian that the street was open to cross.

Basic convenience may be an even better rationale for a legible (and writable) public way. Why perform a digital transaction at a modern-day parking meter when you can text it or use an app to pay before leaving your car? Think driving snowstorm. Think having three kids in the backseat and the meter is 100 meters away. Think not having a credit card at all. All good reasons. This is getting closer to the high-five moment of a digital public way.

If we begin to think of a truly responsive public way we have to rethink what “public” means in the digital age. The analogy here is a city’s information. Getting at a city’s vital signs and the records of public servants has been a long slog for transparency advocates. In the days of exclusively paper-based record-keeping Freedom of Information legislation was one of the only ways to do anything with public records. Then came digitization and the same barriers obtained. You had to go through legal maneuvers to get at it — and even then it was not particularly useful beyond reading it. PDF’s largely made this information static, opaque to computer-aided parsing and tabulation. But the advent of machine-readable online document standards and a shifting political climate towards the value of open government has unlocked torrents of data in cities around the world. What’s come of this can only be described as a new kind of civic engagement: open data has bred an ecosystem of secondary applications, analysis, and interactions that governments could never conceive of, much less produce themselves.

The infrastructure and objects of our current public way are in their paper period.

Certainly, there are screens scattered throughout. Public transit leads the way here. Buses that generate location data, subway platforms that announce arrival times, etc. There’s some digital marketing along the way that occasionally serves up alerts or public service announcements. And every so often you’ll see an advertiser attempt something (barely) interactive — a QR code for more information, typically. But there’s no platform in the software and open data API sense of the word in the physical city.

And yet, many of our public objects are networked — the foundational requirement for a responsive system. Public bikes and bike stations, bus shelters, parking meters, and of course every light pole with a public access point clamped to it — all these things are network endpoints. But they’re not interconnected and they are not open to interaction. There’s no interface for third-party development.

Some City of Chicago Department of Transportation construction projects feature NFC and QR codes on signage onsite that link to information about the project. That’s the paper stage, incunabula. The vision is for direct access to mobile-optimized applications for business permits in situ. More promisingly, the information system underlying the upcoming roll-out of public bike sharing in Chicago (e.g., real-time bike availability info) has an open API. 4,000 bikes and 400 stations will be open to development and interaction in the way that the city’s open data portal is. A step away from paper towards platform.

There’s an inverse to this dynamic, equally ripe with opportunity. The impact of city-dwellers’ use of digital technology when out-and-about has yet to make a any real impact on physical urban design. Mayor Nutter of Philadelphia got a good laugh last year when he released an April Fools Day video touting newly-striped “texting lanes” on sidewalks. But that was parody (though thinking about it a little longer makes it slightly less parodic).

Surpassingly few cities and urban design firms actually give thought to how technology is changing the way the city is used. Which is odd, since so many of the problems that online companies grapple with — what it takes to create a vibrant, safe public space, as one example — have pretty well been solved, if not perfected in implementation. There’s the Facebook approach, which is essentially suburbia: a gated network of affinity that disallows chance encounter and serendipity. And there’s the Twitter approach which is all about non-reciprocal engagement and diversity. (It’s no coincidence that the founder of Twitter is a dilettante urbanist.) This is a choice between mall culture and real urbanism and I fear that our information architects and built environment architects have not even begun the conversation.

The sidewalk is the original social network and its lessons have much to teach the designers of our digital overlay of public spaces.

In Chicago, it’s coming together: a robust open government community of engaged developers (and increasingly savvy residents) fueled by an administration actively publishing data and working to make sure the vendors of our public objects treat it as a platform. There’s a long way to go, but we’ve etched some symbols in the pavement and we’re hoping you follow our lead.