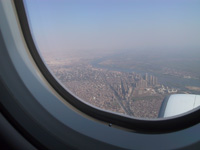 Having made this trip many times now I’m convinced that the approach pattern for Cairo International Airport is nothing more than “head down the Nile and hang a left at the pyramids.” That is exactly what the Alitalia crew did today. As if they were banking just for the tourists. The normal miasma of baking dust and smog was pleasantly absent; you could see for miles. I happened to be on the correct side of the plane to find the Giza Plateau staring me right in the face as I lifted my window shade. From ground level the pyramids pretty much defy belief, but from the air it is different. Coated in the same sand that stretches west all the way to Libya the pyramids seem to grow right out of the desert, like geometrically-perfect shards of earth thrust out by an ancient quake. ‘Course, Cairo creeps right up to the pyramids’ bases on the east side which provides the necessary scale to eventually invoke the same sense of awe you get when you are staring up at them from the ground.

A curious Egyptian behind me on the plane asked an American next to him out of the blue about the presidential debate a few nights ago. He seemed geniunely curious and, as I have experienced myself on previous trips, his second question was “are you a Republican or a Democrat?” The American responded “I’m an independent.” Maybe he didn’t want to get into the conversation that would necessarily flow from a partisan answer, but it seemed like a cordial conversation. I know an American who says she’s Canadian when she travels abroad. Not because she’s embarrassed so much as because she just doesn’t want to engage in the discussion that almost always comes from that admission. I’d never lie about my nationality, but I do understand the urge to sidestep conversation with a stranger about Bush or Iraq or Osama Bin Laden. I’ve never encountered hostility — not here or in Europe — but there’s genuine curiosity and passion in the questions about our country and, well, sometimes I just can’t muster the energy.

I was on my own tonight, sitting on the patio of the Nile Hilton, drowning in the smoke of direct-burn hookah pipes. Those things are not for the casual shisha smoker. Like lighting ten cigarettes, putting ’em on a bong, and going for it. No thanks. I’ll take the wuss molasses variety. Anyway, I’m reading Reading Lolita in Tehran the story of an all-female book club who discover themselves through censored Western texts in Iran. There’s something painfully meta about me reading this in an Egyptian cafe. Reading Reading Lolita. I should have just brought Nabokov and short-circuited the whole pomo loop.

I’m here this time with a documentary production crew working for the History Channel. They are creating a show on the history of Egyptology and the IBM project (yeah, that one) I launched earlier this year figures prominently in it. I am the technical consultant for the shoot and we’re here securing permissions, slapping the baksheesh, and scouting locations — in that order. The show shoots in November.