Apparently, when the mummy of Ramesses II was sent to France for scientific scanning he actually had a passport, just as any corpse crossing country borders must. His profession was listed as “king, deceased.” Not kidding. Reminds me of the customs form the Apollo 11 crew had to fill out when they entered Hawaii after splashing down post-moonshot. What’s the import duty on lunar dirt?

Small world: recently I mentioned reading Reading Lolita in Tehran. Turns out one of the documentary producers I am here with is in talks with the author of that book and some of her students to use it as the seed for a new special on women in Iran. It looks likely to happen. Maybe I should invite her to bookclub. 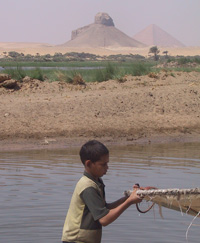 I spent the day scouting “beauty shots” outside of Cairo. In addition to interviews with Egyptologists and shots of the technology from Eternal Egypt we need establishing shots — and lots of ’em. The pyramids of Giza are impressive, of course, but it is often difficult to frame them well because of the throngs of tourists and how closely modern Cairo crawls to their bases. So, we set out for Dahshur. This area near Saqqara about 40 minutes outside of Cairo is the beta test lab of pyramids. They figured out how to do it right here. The Step Pyramid in the distance is the first of the genre, the jaggy Aztec-like prototype to all that came after. The Bent Pyramid is an odd-looking structure whose angle of slope changes from 52 degrees to 43 degrees about half-way up. It is thought that the original angle was not structurally sound. Clearly they had reason to worry about pyramids falling down.

The Red Pyramid — second largest pyramid in all of Egypt — was the real highlight though. It is what the Great Pyramid must have been like before tourism and Cairene sprawl. It is truly remote, rising straight out of the desert, far from paved roads. The entrance to the pyramid is way up its face so there is considerable climbing required just to get in. The descent into the belly of the pyramid, like most, was harrowing. Poorly lit and tiny, the shaft required a hunched-over trot over slats pounded into a wooden ramp. One feels that panic would easily ignite in a place like this. Too many people, too few exits (namely: one, back the way ye came), and above you several million tons of stone wanting nothing more than to finally cede its struggle with gravity. OSHA-certfied this ain’t. To make things worse there was a small wooden platform at the very bottom of the shaft that, when landed on by visitors happy to finally be upright again, sent out a deep ominous rumble. The shaft acted as an amplifier and by the time the soundwaves reverberated up to us you would have thought the place was about to become a rubble-heap. The first time this happened the producer and I turned tail and scampered back up the shaft where the toothless Egyptian just laughed at us. We gave it another go. Funny thing is, once you are down in the burial chambers you feel quite calm though logically you are in more peril there than in the shaft (further from the exit, etc). The power of “open” spaces, I suppose. Dahshur is also remote enough to still have some stunning vistas at a distance of the pyramid complex. We were able to get some great shots (Quicktime clip) of the monuments from across a small lake. The tranquility of the scene, scored by the call to prayer and birdsong, is absolutely foreign in Cairo proper.

I depart Cairo for Luxor tonight where, no doubt, my computer woes will increase. My hard drive died fitfully an hour before I departed for Egypt so I had to grab a second as I ran out the door. Configuring a new machine on-the-fly is hard enough without spotty Wifi (ok, ok, it is impressive that they even have it now but I should not have to crawl into a corner of my room to use it!) and sluggish dial-up. What’s more, my Egyptian cellphone is constantly pummelled with unsolicited Bluetooth messages from nearby devices. I can block them, but by the time I do my inbox has filled up and pushed out some important information I have saved there. Alas.

To Thebes I go.