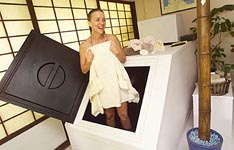 I spent an hour in a sensory deprivation tank a few weeks ago. A friend of mine and I did it together (though not, you know, together). Basically you crawl into a small capsule (pictured above) and lay down into 10 inches of water that’s absorbed 800 pounds of salt. So, you float without effort as in the Dead Sea. The water is warmed to body temperature. There is no sound and no light whatsoever. You can, of course, get out at any point and I did do a bit of feel-around exploration when I got in to allay any panic. The idea is to promote extreme relaxtion (and perhaps other extreme modes of being). Not sleep, exactly, but more like a prolonged hypnagogic state — that weird not-awake, not-asleep period just before you drift off. What’s most striking in retrospect is that, once I got situated, my first thought (and the closest I came to panic) was “what the hell am I going to do for an hour?” I guess that means I needed sensory deprivation. Before long — it is utterly impossible to assess the passing of time — I was just floating, being, not really thinking of anything. My father-in-law is an avid meditator and I can only imagine it was something like that. I did rub my eyes once. Bad idea in the salt solution. All senses deprived except for the sensation of excruciating eye pain! Once out I felt totally refreshed, as though I had taken a long nap. That night at a dinner party I mentioned to friends what I had done. Then, I essentially forgot all about it.

That is, until last week when one my friends — a producer for ABC News — called me up to say that they were going to do a story on sensory deprivation, spinning it as the high-tech answer to the hectic pace of modern life. Oh, and would it be OK if I were interviewed? Sure, I said, thinking I’d just do a quick phone interview. Silly me. They wanted to come to my house and film me being the harried working dad: taking conference calls, working online, changing the baby’s diapers, packing for my business trip, and so on. The irony of it all was that my wife was out of town on business — the first time she’d had to do that in years — and so I really was a bit harried. I called her to see if it was OK to let a TV crew into our house — a house, mind you, that me and two small children had had to ourselves since she was gone. When she picked herself back up off the floor she noted that anyone who saw the newscast would know that it was a complete fabrication and that our nanny was hovering just off-camera. Jealousy, I thought, from an absentee mother. Finally my plight as an overworked father would be known.

The piece is supposed to air in Chicago on ABC at 10:00 PM tonight as part of a ‘Healthbeat’ segment.

It’s a blast from the past but can it really relieve stress? Some say you can float your troubles away. Some people are rediscovering a water technique that shuts out the world. Could just one hour in a special tank not only cut your stress but help with everything from pain relief to fatigue?” Watch “Healthbeat: A Stress Solution?”

I’ll digitize the clip, if possible. Update: the whole segment has been digitized by one of the other people who appears in it. Float on.

Oh, by the way, the lady pictured above wasn’t in my tank. That wouldn’t be deprivation, now would it?