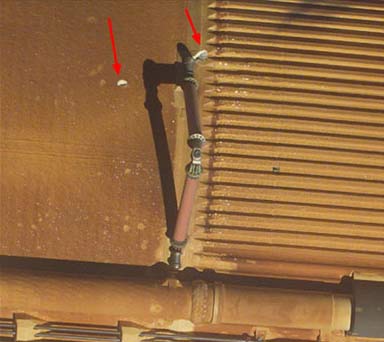 Atlantis is already mated to its own external tank-solid rocket booster launch stack, and was slated for a Sept. 9 liftoff before today’s foam find. NASA also tapped Atlantis to serve as a rescue ship for the STS-114 crew in the remote chance Discovery was too damaged to return home and its astronauts forced to take shelter aboard the space station. That contingency rescue mission is known as STS-300.

No one is faulting NASA for reacting with such care to the news that foam insulation did in fact shake loose during launch. The images of the divots and missing patches are eerie reminders of Columbia, scars of an ignorance we thought we’d overcome. But one has to wonder if the dozens of new cameras trained on the shuttle during ascent is making the problem seem worse than it is. Stuff shakes loose in the tug-o-war with gravity. Always has. In whatever we build to fly us to space next we need to attempt to prevent debris and harden whatever critical surfaces might be compromised by that debris.[*] This kind of protection was not added in the post-Columbia changes, to my knowledge.

The clock is ticking on the shuttle transportation system. My bet, we won’t make 2010.

Re-entry is going to be tense.

[*] The heat shield on the Apollo capsule was safely sheathed until very close to the beginning of re-entry, for example.