When the metaverse is your town hall

Tuesday in Beijing I was part of a team that did something truly bizarre and unique. We helped the CEO of IBM, Sam Palmisano, deliver the results of IBM’s Innovation Jam to an audience inside of Second Life. The virtual venue complemented the 8,000 IBM’ers in China he was speaking directly to as well as the hundreds of thousands of colleagues watching the event via internal webcast. 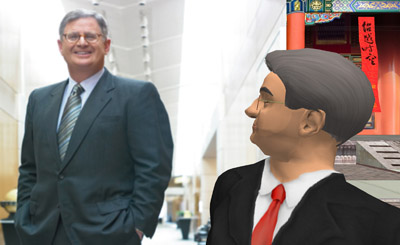 The reason Palmisano did this was to highlight IBM’s commitment to virtual world technology, one of ten new focus areas coming out of the Innovation Jam. (Roo’s got a bit more detail on the other Jam ideas over at Eightbar.) So, rather than just say we’re committed to the space, we figured we’d have Sam show it. Sam carried on a conversation with Irving Wladawsky-Berger, who was at a supercomputing convention in Tampa, via Second Life and phone line while a few dozen IBM’ers from around the world milled about smartly. 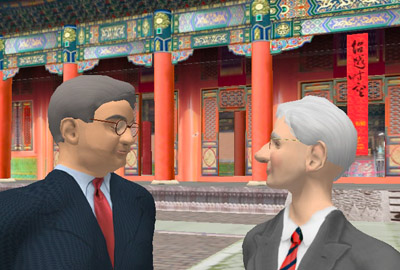 It was truly challenging to pull off, though not for the reasons you might expect. The execs were very positive and open-minded about showing a live interaction in Second Life. Trouble was, preparing for doing so in China was a nightmare of failover and logistical planning. Basically every shred of what we hoped to do live had to be filmed machinima-style as a backup in case we lost the connection. Thankfully, it stayed stable at showtime, but the virtual filming easily consumed 95% of our prep time. You just try corralling talented, curious, script-wielding colleagues in Second Life to serve as virtual extras. It is like arranging toddlers for a photo shoot. Everyone wants to show off their latest set of wings or ability to make it rain. It took forever. Still, we had to have the video. So much easier than trying to explain to 8,000 people that the grid’s down. 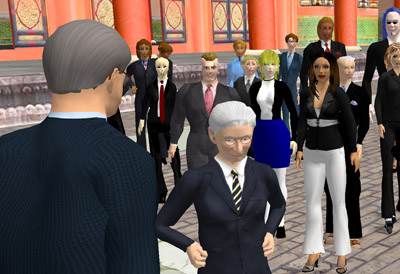 For the actual event, I was in Beijing with small group of colleagues to anchor the Sam-side interaction. We too were organized for failover. One colleague served as the vitual camera person, another was her backup and video triggerer. Others maintained contact with the IBM crowd, directing them and prepping them for the moment when Sam would “enter” the virtual world being displayed to the real audience in Beijing. Virtual webcasting.

The setting for all this was Thinkland, a private IBM island in Second Life that serves as a testbed for the Forbidden City project mentioned here previously. While the project itself will not ultimately live in SL and only launches in 2008, having a ready virtual environment so clearly China-themed was too good to pass up. Thinkland became the “stage” for the virtual event.

The press response has been strong. BusinessWeek had the exclusive (I believe) with ZDNet, Reuters (and their SL bureau), and a slew of others following closely behind.

Can’t wait to see what happens now. IBM’s ad hoc Virtual Universe Community accomplished a stunning amount of work as a non-organization. Let’s hope the new funding and focus doesn’t squelch any of the passion that has fueled the group to date.

UPDATE: Irving blogs this in much greater detail.

One response to “When the metaverse is your town hall”