Yesterday morning I killed a man ninja-style for leaving poop on my property.

6:30AM. It is freezing outside with a windchill 20 degrees below zero. Rain had pooled everywhere and then froze on Tuesday afternoon into deadly flat, black ice. Then Tuesday night it snowed very lightly, just a sprinkling, enough to veil any distinction between ice and safe ground.

I was bundling up tighter than I ever have to go for a run. I was clad entirely in black, head to toe, only my eyes showing. I was a ninja. I had real ultimate power.

Preparing in my foyer I peered out to see a fellow walking his dog on the sidewalk. He was in shorts and slippers, clearly just out of bed. OK, fine. His hypothermia, not mine. Then his dog shat on my lawn. I waited for the guy to pick up his doggy doo-doo (as the city ordinance requires) but he did not. Perhaps he was too cold to think, wearing shorts when it was 3° out, this genius among men. Whatever the reason, he trotted off. 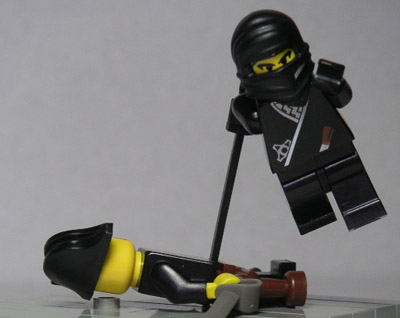 So I emerged from the house, silently, as ninjas do. I caught his attention, pointed wordlessly to the crap on the snow in my lawn — and clearly scared the hell out of the guy simply by staring at him, as ninjas do.

This is where the exact sequence of events gets blurry for, as you probably know, ninjas move with such speed and dexterity that they can hardly be caught on film or remembered. I believe I performed a double backflip off my porch and smote the shorts-wearing poop-leaver dead in his tracks. (See image above.) Or, equally possible, he may have just slipped on the black ice at that moment and hurt himself quite badly.*

Either way he was taught a valuable lesson: ninjas dislike fecal vandalism.

* My son later noted, “Dad, you’re not a ninja. Of course he slipped. He was wearing slippers.”