My father, brother, sister and I have a dorky little bookclub. We don’t meet nearly as often as we used to, but it’s still an excuse to get together for lunch once in a while and make fun of each other for misreading a given book. We rotate selection responsibility, a responsibility which includes the book and a place for lunch somewhat related to the topic of the book.

The current selection was mine, The World Without Us by Alan Weisman, a thoughtful if scattershot exploration of what would happen to the human-built world if we all suddenly disappeared. It is billed as a “thought experiment.” One of these experiments concerns envisioning what would happen if there were no one to maintain the petropolis of oil machinery, tanks, and pipes that dominate the sprawl between Galveston Bay and Houston. (Some of it would break down and rust into the soil and some of it would blow up, igniting the network of delivery pipes that connect to the rest of the country.)

The best parts of the book aren’t hypotheses about catastrophe or collapse but examples of built places since abandoned, mini-worlds without us: the DMZ in North Korea, much of Turkish Cyprus, the Mayan empire. Short version: natures takes things back far faster than you’d think but there are certain things that our actions have wrought — billions of microscopic plastic shards in the oceans, for example — that are going to be part of the world until the sun blows up and ends it all.

It’s an ecological manifesto, of course, an extreme version of pointing out that being green isn’t just mitigating our disequilibrium with the environment going forward; it’s about undoing what’s been done in the past too. That’s the point of positing the highly unlikely (though not impossible) scenario in which all the polluting human beings suddenly disappear: the planet’s still fucked.

Chew on that, this Earth Day.

We met to discuss the book at the Garfield Park Conservatory, a really wonderful 100-year-old greenhouse complex that’s part of the city’s park district. A microcosm of the world without us, no? 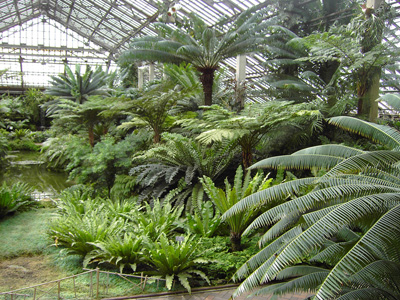 Well, not exactly. For one, even a botanical park like this is completely artificial; these plants would never live together naturally. But more interestingly, in a world suddenly without us a conservatory would actually be a real threat to the environment. The glass and structure would fail rather quickly, exposing the flora and its seeds and pollen to the winds and animals. Much of it would die off but some of it, nearly all “invasive” to local ecologies, would make its way out into the environment and wreak havoc. That ain’t natural. (For those of you who’ve seen I Am Legend you’ll note that this is a similar scenario to the predators from the Bronx Zoo competing with Will Smith for game in Times Square.)

We ate outside — the weather topped 70F today. Only as we left I noticed that the benches we were sitting on had carved on them one of my favorite poems, Anecdote of the Jar by Wallace Stevens. Seems appropriate for today.

I placed a jar in Tennessee,
And round it was, upon a hill.
It made the slovenly wilderness
Surround that hill.

The wilderness rose up to it,
And sprawled around, no longer wild.
The jar was round upon the ground
And tall and of a port in air.

It took dominion every where.
The jar was gray and bare.
It did not give of bird or bush,
Like nothing else in Tennessee.

You won’t believe it, but it was nothing but coincidence that we chose today to meet about this particular book. I of course enjoyed it. I like my book club meetings laden with meaning.

One response to “The slovenly wilderness”