Africa is a way of thinking

I came to some startlingly common sense realizations while in Africa. For instance, its now clear to me that sustainable environment practices and Africa are inextricably linked. They aren’t separate matters or concerns or causes. To act on one is to act on the other.

Here’s the obvious part. Africa — and the entire “Global South,” as it is often called — stands to lose the most from planet-wide environmental deterioration. The fate of Africa has always firstly been tied to the environment. Even when you subtract out all the man-made horrors that Africa has seen life on the continent is shaped in deep ways by the ecological, geological, and meteorological hand it has been dealt. Subsistence agriculture, wars over limited (or precious) resources, lack of access to coasts, the range of the tsetse fly — all these things define life more immediately than the environment does (for now) in other places.

But there was insight too. A lesson, you could say, that the first world can learn from the third. Sustainability is a way of life for Africans. They don’t think about it as such. It isn’t a campaign or a movement like it has become in the West, but it is evident everywhere, woven into everything Africans do.

Simply put, Africans live with resource scarcity. They have not experienced consumption out of whack with production because it has never been a possibility. 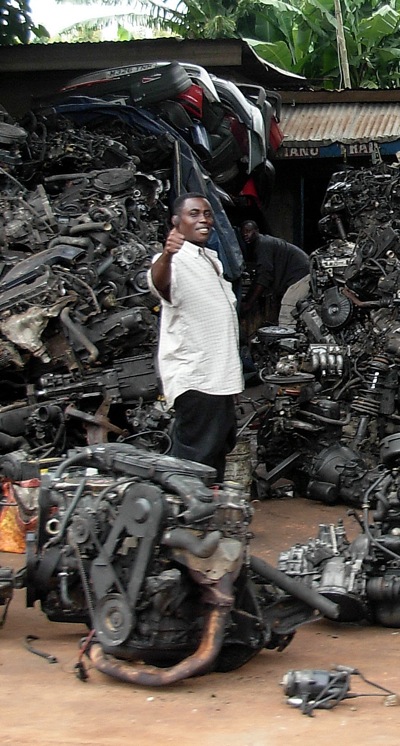 For every place you see selling cars you see five places recycling every possible component of the cars. Usually its for repair, sometimes it is to create something utterly different.

Or take tro-tros, the ubiquitous, horn-happy minivans that criss-cross every part of Ghana moving people more efficiently than a bus system every could. It’s a totally decentralized, mostly private group taxi service. Mass transit on an unbelievable scale with no set routes at all. Need a ride? Flag a tro-tro. You’ll get where you’re going. (Not unlike hailing a “taxi” in Russia, though there rides are less frequent, less capacious.) While tro-tros are almost universally decrepit, smoke-belching buckets of bolts, the system as a whole is by far more environmentally friendly than private cars or even a fleet of taxis. 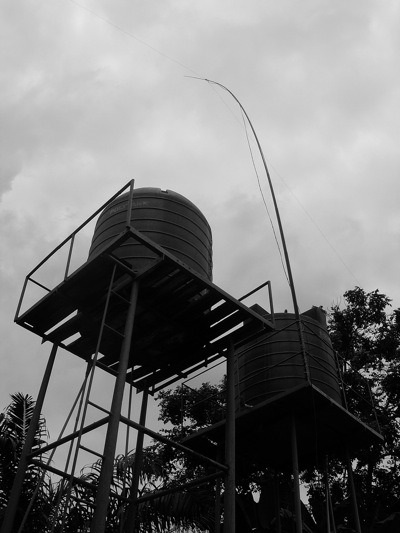 One fact of life in Ghana is the unreliability of centralized services. The electricity grid, for example, cuts out a few times every week. Just … off. Usually mid-day when it is hottest out. Yet this is not nearly as disruptive as it would be in the West. Partially this is just an attitude of resignation; that’s just the way it is. But because it’s the norm most places simply do it themselves with generators on standby (or have ways of manually doing what would otherwise be electrically-powered).

There’s no central water supply either so in urban areas private gravity tanks (or nearby streams) provide running water. The explosive growth of mobile phones is in part fueled by a lack of reliance on a centralized grid of services. It’s obviously not industrial age mega-infrastructure but more like modular, emergent services — build as you go, bottom-up. Like the Internet itself, basic services are built to work around outages.

To a Westerner this seems like privation but, looked at another way, it is a built-in constraint on excess usage. Self-sufficiency isn’t radical; it’s practical. And self-sufficiency naturally requires an intimate knowledge of one’s own patterns of consumption. You use what you have and nothing more. It ain’t rocket science. 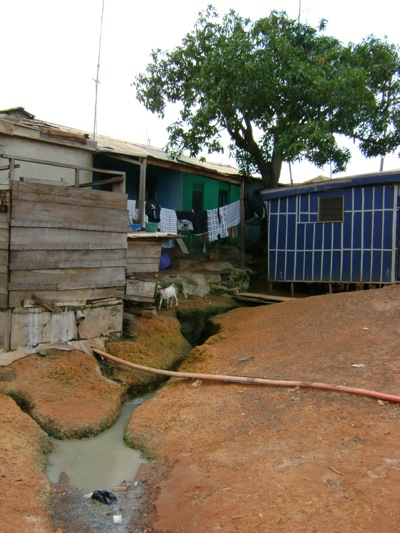 So why is this a lesson? Certainly I’m not claiming that open sewers or power outages are the way forward. Nor should it be taken to mean that Africans are somehow immune to over-exploitation of resources.

Yet, Africa provides an example of what a society might look like that has so totally internalized sustainable living that it informs everything it does. Africa as a behavioral template, not a developmental one.

There are many paths that lead to this way of living within one’s means. You can choose to do it or you can be forced to because all your other options have been exhausted. Most of Africa has no other choice. 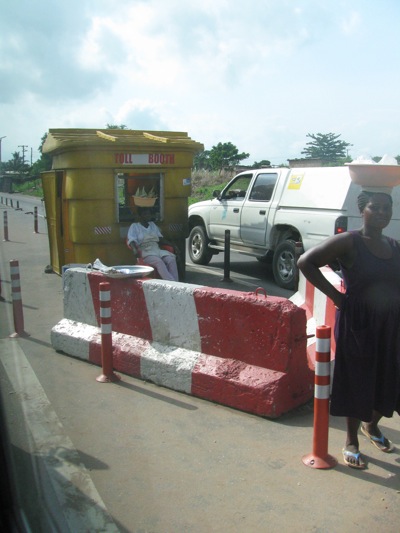 It took me a while to realize how pragmatic the idiosyncrasies of daily life are in Ghana. After first I thought the army of vendors on the road was a nuisance. They’re not “roadside” but in the middle of the road, often long lines of people selling the exact same thing — tissues, water, power strips, mangos, anything. (Even the mayor wants them off the road.)

But actually it makes a ton of sense because traffic is often such a mess. It’s like one huge drive-through mall. In the lingo of a typical consultant: they’ve monetized gridlock. It’s efficient and practical, such as at the toll stop pictured above. I’m not arguing for in-road vending so much as noting that what seems crude is often entirely sensible, bordering on ingenious.

It’s hard for non-Ghanaians not to do a double-take when they see women carrying staggering loads on their heads, but once the shock wears off you realize, wow, that really is efficient. The arms are free to do other things while the entire frame of the body distributes the load atop the spinal column. Also, it makes for good posture.

But the most practical form of carriage is the way babies are swaddled. Just a single sheet wrapped around the child who’s straddling the mother’s back and literally sitting atop her butt. I never once saw a child squirming or screaming and the moms looked similarly non-plussed. Again, the arms are free to do whatever.

What do baby swaddling and sustainable living have to do with one another? They’re both examples of deep-rooted pragmatism. It seems simple, even backwards sometimes, but the way of life I saw both in Ghana and Kenya was firstly about solving everyday problems. It’s largely coincidental that many of these problems are matters of production and consumption — the very basis on our misaligned relationship with the planet.

Let’s take some inspiration from Africa. It’s a plentiful, renewable resource, after all. 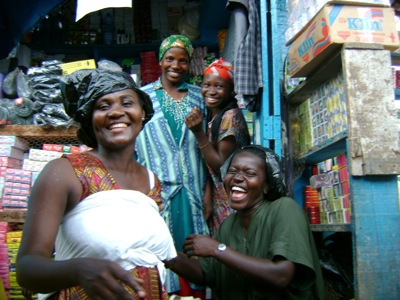