Geeks with a project

If you spend any time on the web you know that today is the 40th anniversary of Apollo 11’s moon landing and the first steps of humans on the lunar surface. There’s been some great coverage from We Choose The Moon, to the live Twitter feed “replay”, to Kottke’s (now-finished) real-time TV coverage playback, to the Google graphic that actually has changed to follow the progression of the landing (and earthrise)!

The commemoration has caused me to reflect personally on the impact of the moon landing. Despite what you may have heard, the name of this blog references the upper half of the lunar lander, the stage that ascends to rendezvous with the command module for the journey home. My choice of that term came from a period of my life of intense interest in spaceflight* partially because of the sheer thrill of it, partially because of the series From The Earth To The Moon, but mostly because, at the time, I was a young project manager in a massive organization who saw in the moonshots the attempt to do something amazing with lots of smart people, cutting-edge technology, and a common goal. I didn’t want to be Neil Armstrong so much as Gene Kranz.

In the tributes, you’re not hearing a lot about the thousands of private contractors who helped plop the 12 guys on the moon. But the organization of that many people to do something of that magnitude in just a little more than 7 years may be as remarkable as the outcome.

IBM, the company that I work for, was a large part of this effort and I admit that this is a source of pride for me. I’ve had this photo of mission control taped to my cube for as long as I can remember. 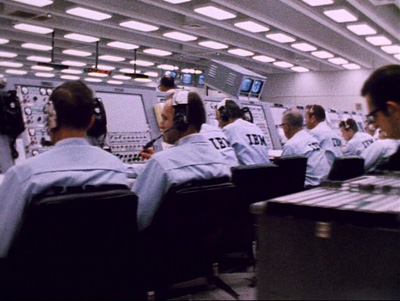 These are my people. Practitioners of a timeless nerdiness that I think of often when I confront organizational bureaucracy or technical hurdles in my own job — one which ain’t, after all, rocket science. IBM has a great subsite up on our contribution to the space race.

Closer to home, I have the memory of my wife’s grandfather, William Boulet, who went to work as an engineer for Boeing after leaving the Army Air Corps after WWII (where he survived a year as a Nazi prisoner). At Boeing Grandpa Boulet designed a particular bolt that was used inside the fuselage of the Saturn V rocket and for his service he was given a commemorative medal — a keepsake I was given by his family when he passed away in 2005. I grabbed it before I left for work today. Not exactly sure why, but I felt like having it with me. 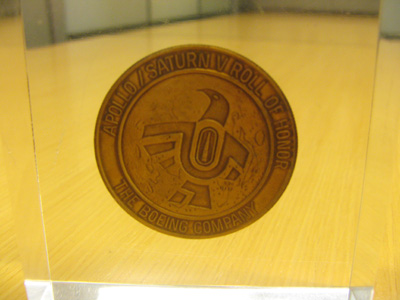 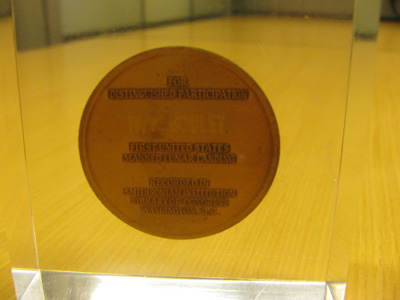 It isn’t nostalgia, of course, for I was not alive for any but the very last landing — and only a newborn then. For me, the Apollo program is equal parts inspirational and aspirational. Whether you agree with the purely political motives that set us on the course to the moon or not, my feeling is that what the effort itself represents is the very best of what humans can do when given a massive challenge packaged in a disheveled box of constraint.

We certainly have freighters full of that particular parcel today. Let’s get unwrapping.

* An interest, it should be noted, that has not so much waned as been tempered by the seeming lack of grand purpose that NASA has fallen into as an orbital trucking company.

One response to “Geeks with a project”