Intersections in space and time 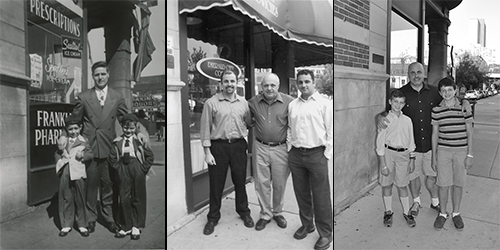 Sometime in the late 1940’s my grandfather, Eddie Tolva, took his two sons — my father and uncle — to the corner of Dakin Street and Sheridan Road and someone snapped a photo. Just three blocks north of the Wrigley Field scoreboard and nestled between a cemetery and a westward jog in what is now the CTA Red Line elevated tracks, this was the corner of the sleepy little street that my dad grew up on.

When I first moved back to Chicago in 2000 I spent a considerable amount of time trying to find the location of this photo. I knew the neighborhood generally (what is now known as Buena Park, part of Uptown), so I just rode my bike looking for the few architectural elements contained in the photo. Eventually I found the building — 3936 N. Sheridan — and, in 2003, got my brother and father together to re-enact the shot. What was once Franklin Pharmacy was then Emerald City Coffee. The proprietors told us that the corner shop had been many things over the years including a pet shop and a porn store.

A few years later I returned with a friend to try my hand at the photo-in-the-real-world perspectival trick (part of the fun “Looking Into The Past” Flickr group). 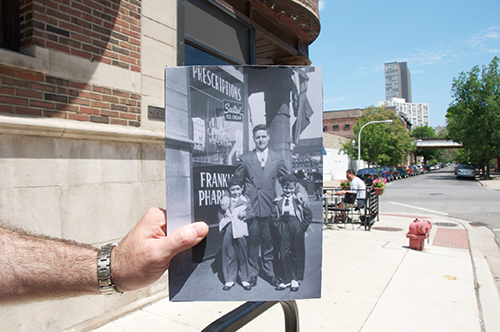 This past weekend I took my family back to the corner, completing a three-generation sort of family placemaking. Here’s a larger version of the triptych I put together. (And the complete album.)

There’s a plaque on the masonry of the building right at the spot of the photo which reads “On this spot in 1897 nothing happened.” Who knows who or why this location was chosen for the pseudo-historical marker, but I do enjoy the irony that this particularly meaningful spot in my family history is demarcated by a sign like that.

The building itself may not be there much longer. Its owner wants to raze it for an 8-story transit-oriented residential complex. But the corner will always be there, my family’s little locus of reference in the middle of an ever-changing city.