A few notes on rebuilding my first LEGO set from 1979. 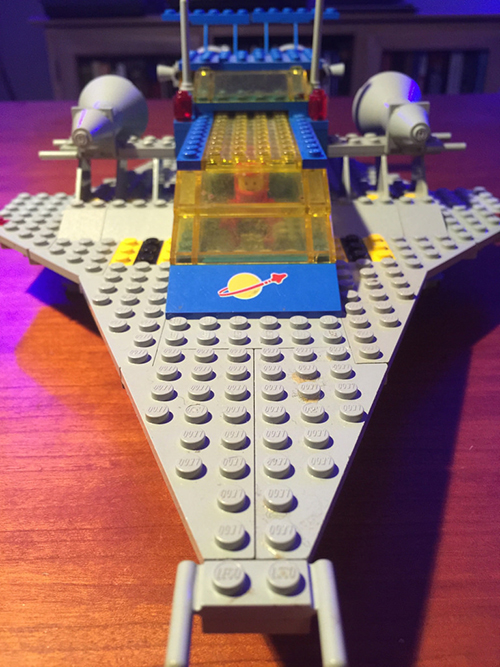 I set out to build the iconic, genre-defining LEGO Galaxy Explorer. I knew I had the original pieces as I have every brick I was ever given, bought, or bought for my own kids. There are tens of thousands of pieces in several bins full of 35 years of detritus that inadvertantly got mixed into the slurry. Batteries from the 1980’s (long since having leaked their acid), various mementos, trash, thumbtacks, model pieces, indecipherable bits of toys and games, sharp shards of pieces long since stepped-on and cracked. Finding the original bricks was part autobiographical archaeology, part that Russian Roulette scene with the log creature in Flash Gordon.

The LEGO Galaxy Explorer jumpstarted the “Classic” phase of space-themed brick sets. Before dueling factions, before space police, before aliens and whatever the hell Bionicle was, Classic Space was about exploration, period. It’s interesting to read the set as a kind of cultural document for the vision (perhaps a Danish vision) of what spaceflight was or could be in the late 70’s.

Apollo was over. Skylab had just plummeted back to Earth. Salyut 6 still orbited. And the Space Shuttle was in testing for its maiden voyage. Clearly the shuttle was an influence on the Galaxy Explorer: both have fixed wings and separate crew and cargo compartments. But exploring the design of the brick ship suggests that the new NASA orbiter was not its only inspiration. 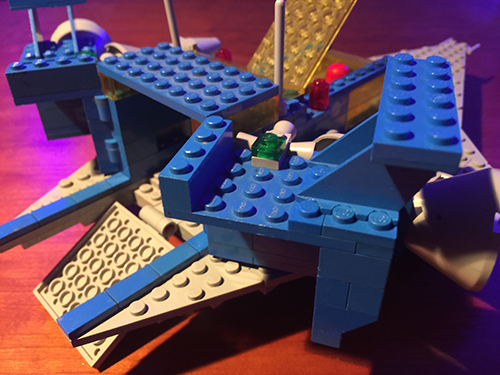 The answer is what makes LEGO such an incredible company: the design of the ship is as influenced by how human beings play with interlocking bricks as it is by actual spaceships. It’s the difference between LEGO and model kits. For one, kids play with LEGO bricks in an environment with gravity. They might fly the ship in their hand through the air, but actually interacting with it takes place on some surface, orbital mechanics be damned. This explains the loading ramp (kid drives LEGO car around on a surface and into the ship) and the vertical take off (kid grabs the ship and yanks it up), and even the wings (that’s how the kid holds it). It’s a very planet-based (or at least surface-based) view of space travel, because that’s how (and where) kids play.

Play as primary design driver is evident in an odd little locking piece that keeps the cargo bay doors from flying open. It is one of the rare instances I know of where a piece is added simply for convenience of real-world usage. The 1×2 flat blue piece has no aesthetic or functional value on the ship-as-ship, only for ship-as-plaything. Take that, fourth wall! Then there’s the ornamental, gaudy and inexplicable: racing stripes (huh?), logos, vents, fuselage arrows (for ground crews?) and livery numbers. No decals, thankfully. The whole thing was driven by an actual circular steering wheel (something even airplanes don’t use). Maybe the ship never did leave the ground: the minifigs have visor-less helmets and zero protection from the (lack of) elements other than their spacesuits. 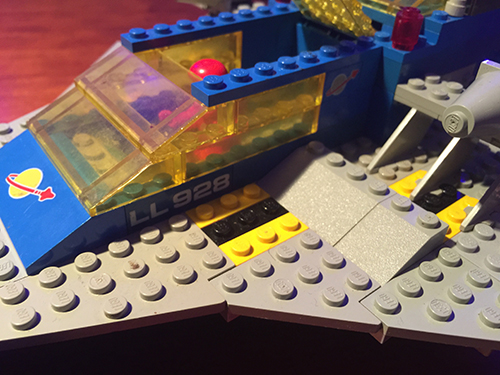 It’s the color scheme, though, that defines Classic Space for me. Gray base plates and horizontal surfaces, blue structural elements, translucent yellow windows. Toss in a few computer bricks (oh, the computer brick!), a radar dish, and some green and red see-through 1×3 cylinders — that aesthetic shaped my LEGO creations for the better part of a decade. (Green? There is no green in space.)

But there is yellow. As in yellowing pieces. Though I was fastidious in making sure I found ever single correct piece — never substituting or otherwise being clever — I obviously did not find all the original pieces. The slight yellowing (and relative state of cruft accumulation) on some of the bricks is a dead giveaway. I bet 30% of the ship is original. I kinda like it actually. The original Star Wars showed us how cool beaten-up, dusty and old space could be. My LEGO Galaxy Explorer wears the patina of time well.

If you’ve seen The LEGO Movie you have witnessed the legacy of the Explorer. The character Benny maniacally flies around yelling “Spaceship! Spaceship! Spaceship!” in a craft that is clearly inspired by the original set. It’s over-the-top, but retains the rough geometry, retro rockets, racing strips, and (maybe) the cargo bay. In a nod to dorks like me in the film, the actual spacesuited character is cracked and clearly worn through time.

Sometimes the future is nostalgia.