Almost exactly a year ago my sons asked me what “investing” was. A strange question from a 9- and 7-year-old, but I was impressed by the curiosity and it seemed timely given the banking implosion.

I lost the boys midway between arcane regulation and exotic financial instruments, but they were intrigued with the idea of a business more complex than a lemonade stand. And then they wouldn’t shut up about starting one, embarking on an entrepreneurial brainstorming session whose intensity would have made a venture capitalist smile. (Or back away slowly.) 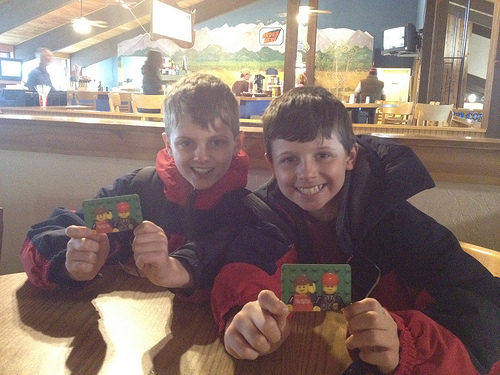 The boys revisiting the site of their business founding, Gunnison Airport, Colorado

The idea, fairly speedily arrived at, was to build on something the kids had been staring at all their lives. In the days following the birth of each of the three kids I built grayscale mosaics of their birth photos out of 1×1 LEGO bricks. They’ve hung on the wall ever since. The business idea, quite simply, was to build these mosaics for others.

And so was born The Brick Brothers. 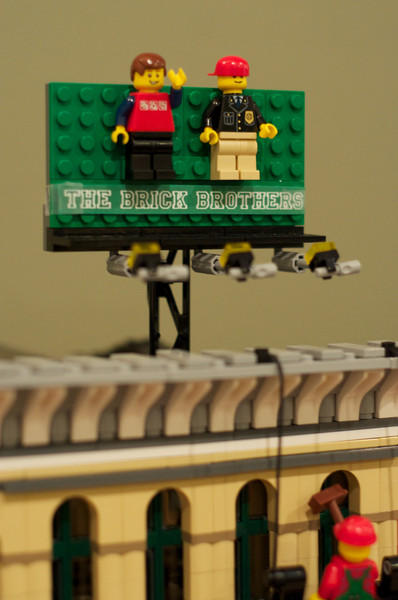 Listen up, folks. Here’s where I divulge trade secrets.

We built the site on the superb Shopify platform. It accepts photos uploaded from customers who purchase a completed mosaic or just the raw materials.

We then use an open source application call PicToBrick to generate a number of gridded (48×48), reduced-color images. The image that comes closest to capturing the essence of the original photo is chosen and printed out as a guide for the assembly.

Then the boys snap the pieces onto the baseplate, following what is essentially a color-by-numbers schematic. Dangerously, this is mind-numbing (and finger-numbing) but also requires attention to detail: if you pop the wrong brick in place and only notice it several rows later it’s a huge effort to remove the studs. What makes this a less-than-rare occurrence is that you really only get a sense of the overall image by moving away from it. When you’re up close snapping away it is often impossible to notice an error.

The whole effort takes about 4-6 hours depending on distraction. Then we package up and ship out.

One hurdle — aside from child labor laws — has been finding the 1×1 bricks in bulk cheaply enough. LEGO doesn’t sell in bulk to mere mortals and those bins at their stores contain very specialized bricks. Luckily there’s a massive ecosystem of LEGO re-sellers online, centered on a marketplace called BrickLink. But there’s no single supplier. It’s a scramble to stay well-inventoried and not break the bank. The boys' first investment in The Brick Brothers (from relative strangers at a Cubs game), July 24, 2011

It should be obvious we’re not in this little enterprise for profit, but I’d continue the business with the boys even at a financial loss given its many lessons: time-management, expenses vs. revenue, the importance of marketing, the concept of chiaroscuro, how easy it is to be driven insane by tiny LEGO blocks, etc. We’re having fun and not losing money. Can’t ask for much more than that.