CityFi partners John Tolva and Story Bellows frequently find themselves on the frontier of urban change. Their facilitation of major projects often convenes public-private stakeholders, utilizes new models of technology and innovation, and drives policy development, all with the goal of making our cities more livable, vibrant and economically competitive. Currently, this mission extends itself to the western frontier of Colorado. These days, the booming Denver-metropolitan region has largely kicked its historical image as that of a dusty cow town; in fact, two of CityFi’s major Colorado-based projects illustrate the innovative, multi-sector and often regional collaborative momentum this state has built toward creating sustainable, positive change for its diverse communities.

The history of CityFi coincides with the beginning of its relationship with the Denver South Economic Development Partnership (Denver South EDP); it was the project to develop a blueprint for turning the Denver South region — a conglomeration of several small cities driven by its economic hub in the Denver Technological Center — into a 21st Century Innovation District, which was the firm’s first. The Blueprint is a critical component to retrofitting this region — a major economic driver for the state, contributing nearly 20 percent of the state’s economic output — so as to keep pace with the urban changes that Denver is undergoing. Denver South is primarily centered around the major artery of Interstate 25, which runs north-south into the heart of downtown Denver. A new study recently projected that in the next ten years, 70,000 additional people would be coming to the region each day to work, highlighting the critical nature and urgency of determining how infrastructure, local culture and the built environment could be transformed to meet these needs in coming years.

As a result, “the blueprint reinvents the approach to making an effective and attractive suburban landscape by providing a guide for city officials and developers as to how to integrate new technology solutions, approaches to policy and governance, improved land use and cultural change,” Bellows said. 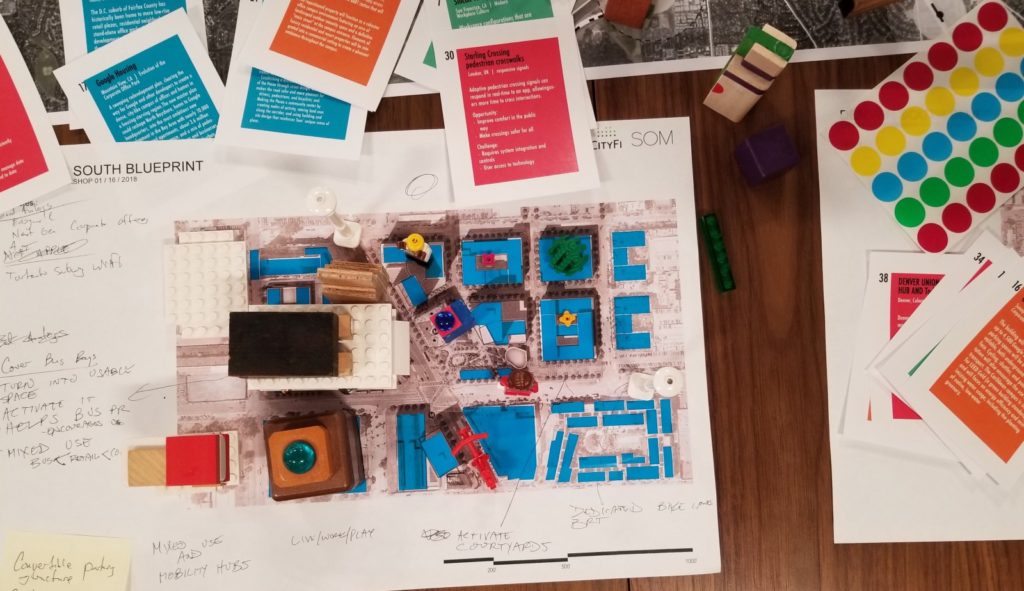 For Denver South EDP, this shift is important to maintaining business vitality in the area, as without addressing these barriers, the region risks losing business to other parts of the city, or even other states. The blueprint also leverages one of the most significant investments made in Denver South in recent decades, that of RTD’s transit infrastructure, including a light rail system, which stretches as far southeast as the City of Lone Tree. CityFi wants to better integrate this asset into the built environment to improve Denver South as a place that can accommodate increased people and their desire to live, work and play within proximity.

CityFi sees the challenge of Denver South as also its greatest opportunity. While Denver South may not have the caché or national intrigue of Denver’s downtown core, CityFi recognizes its fundamental importance as part of Denver’s economic engine, and believes formulating its successful future can inform the efforts of other cities also recognizing the benefit of retrofitting aspects of suburbia to accommodate population growth, mobility patterns and new models of the workplace. In short, CityFi sees opportunity to improve development, asset use, business decision-making and policy in Denver South to not only make the region sustainable, but also to improve the quality of life for those that live and/or work in the area. “Citizens everywhere — not just those in the densest, most active parts of a city — deserve the chance to feel truly invested in and love where they live,” Tolva said.

One of Colorado’s particular strengths, including within the Denver South region, is its propensity toward multi-sector and multi-jurisdictional collaboration. This unique asset is significant when considering the scope of retrofitting suburban regions for the future. Rather than decisions made in siloed vacuums, urban change leaders — from city officials and developers, to business leaders and citizens — can collectively work to shape the development of our cities. “Not only does this approach build capacity, it allows problems to be comprehensively addressed so that the resiliency to weather change is strengthened,” Bellows said. This collaborative approach will help to overcome Denver South’s challenges, including defying the misperception that growth and density leads to a lower quality of life for its citizens. Rather, CityFi seeks to reframe this by educating on how population growth and changes to the built environment will actually provide, not take away from, increased choice and connectivity. CityFi and Denver South EDP believe this will become evident as the blueprint is incorporated into future planning practices, and holds the potential to become a national model for how to approach suburban retrofit that accommodate the needs of both old and new residents and workforce.

CityFi’s other major project with Denver South EDP is the ongoing creation of the Colorado Smart Cities Alliance, which capitalizes on CityFi principles of using innovation and technology to solve the complex urban challenges our cities face. The Alliance — while still nimble and in its early stages — serves as an incubator for Smart City pilot projects, living civic labs, resource and best-practice sharing, and multi-sector and jurisdiction engagement around city challenges that cannot necessarily be addressed through traditional government or private sector avenues.

What is most unique about the Alliance, and what is also evident in the Denver South Blueprint, is the additional leverage that regional collaboration and problem-solving bring to the table. While the Alliance originally began under the auspice of Denver South EDP and the cities it represents, it was quickly realized that this effort would increase in value and return on investment for Colorado citizens if it became a statewide project in which all major cities were engaged. While Colorado cities vary greatly — from small mountain towns, to the Western Slope, to the major cities of the I-25 corridor along the Front Range — what is evident is that each of these cities are facing challenges while adapting to rapidly-changing environments, whether urban, rural or suburban. 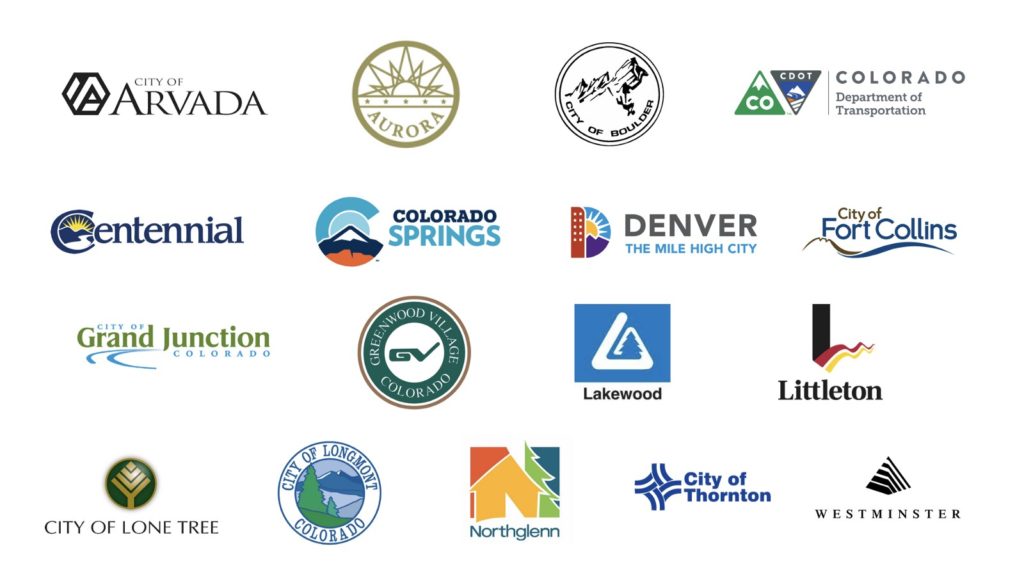 As the Alliance unfolds, it will have two main roles: first, to solve city problems where solutions do not currently exist through traditional procurement channels; in essence, as Tolva says, “to loosen the innovation throttle inside of cities, and reduce the risk associated with implementing innovation in government structures.” The other main objective will be for cities to be able to capitalize on the economic development opportunities that arise from the resulting multi-city, cross-sector collaboration. As the Alliance incorporates private sector partners, there is a reciprocal return on investment in being able to test new technologies across a variety of city landscapes to understand the true costs and benefits of their application. CityFi’s role is critical in managing the balance between these public and private participants, while recognizing that both parties are necessary to shape the direction of Smart City solutions and provide a pathway for two-way learning.

As is core to its mission, CityFi advises widening the proverbial doors of the Alliance to involve these cities’ citizens in the process. “Too often in Smart City conversations, there are no citizens present. It’s on us to frame the discovery of city challenges in terms of those they affect — business owners, citizens and workforce. That is ultimately the defining philosophy of CityFi,” Tolva said. “Skepticism about Smart City initiatives arises because they are not centered around the citizen experience.”

CityFi’s excitement around its work with the Alliance is palatable; Bellows and Tolva both acknowledge that while many cities have attempted to pull off a similar structure alone, the Alliance is a national trailblazer in terms of conducting these efforts on a regional or state level. In that spirit, Tolva said, “we are less interested in the jurisdictional boundaries than we are in the experience of these places.”

CityFi’s presence in Colorado continues to grow, and is currently working with Denver Mobility Choice, the City of Aspen, and Panasonic on new urban change projects. The Colorado-based CityFi team has also doubled in the past month with the hiring of a new associate. Look for more updates about CityFi’s Colorado projects in upcoming months.